Pan Am Games village on time, on budget – tops off condo building 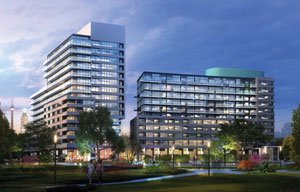 The 2015 Pan/Parapan American Games athletes’ village that will later become one of Toronto’s most innovative, new neighbourhoods is 60 per cent complete, on time and on budget.

The $514-million Canary District in the city’s east downtown will become a live-work-play urban village after the games conclude.

The master-planned community will have 808 market units (including condominium, townhouses and lofts), along with 253 units of affordable housing of various types.

The final building in the development, a 437-unit building known as Canary Park Condominiums (shown in image), was topped off in a November ceremony. The building features two mid-rise towers of 11 and 15 storeys as well as retail space.

“We believe the Canary District will attract residents from young families to empty-nesters, while inspiring leading businesses for decades to come,” Dundee Kilmer Developments L.P. president Jason Lester said in a release.

All buildings have been designed to achieve LEED Gold certification and have green roofs. Amenities include retail stores, cafes and restaurants.

If all that sounds like a lot to build for an athletes’ village, consider that the quadrennial games bring together athletes from North, South and Central America.

For the 2015 games, Toronto expects more than 10,000 athletes, coaches and delegates from 41 countries. The athletes will compete in 51 sports at more than 40 venues throughout the Greater Golden Horseshoe Region.

The district has already won several industry awards, including Best Urban Community of the Year from the National Association of Home Builders and the Canadian Architects Award of Excellence.

The accolades have come for such features as an extensive pedestrian network with 30- to 40-foot wide granite paved sidewalks; and large building windows and balconies offering a connection between residents living above and the streets below.

The developer says the latter is a “direct nod to the late Toronto urban planning visionary Jane Jacobs’ ‘eyes on the street’ thesis.”

The community is going to feature advanced connectivity, offering some of the world’s fastest broadband connection speeds, which developers say will rank among the  top seven most sophisticated networks.

The former is a privately held, Toronto-based real estate investment, development and asset management company with approximately $13 billion in assets.