Fresh off its recognition as a TSX Venture 50 winner for 2015, Vancouver-based Parkit Enterprise Inc. has set out to supercharge its growth south of the border with a joint venture and planned institution financing deal of about $150 million US. 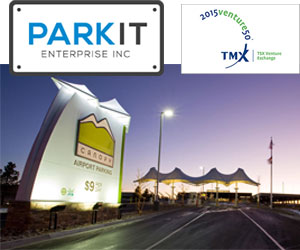 Parkit, headed by aviation industry vet and chief executive officer Rick Baxter, already owns two parking lot properties in the United States and expects that it can grow quickly in what today can be characterized as a fragmented industry dominated by small operators.

“Right now we have two assets, one in Denver and the other in Oakland – the value of those is close to $60 million,” said Baxter. “But we want to grow out in a larger joint venture about a $500-million platform and that is where the upside capital appreciation will be.”

The Vancouver company expects the equity deal to raise the $150 million will attract U.S. institutional investors that specialize in alternative investments such as parking.

The Parkit CEO expects the company can reach the $500-million mark in “three to five years, depending on the size of the acquisitions that we make and what we are seeing once we are going into deployment mode.”

The fall of the loonie against the U.S. dollar should not be a factor with regard to the financing deal and in fact could prove a major boon to Parkit’s Canadian shareholders, Baxter said.

“We are meeting with U.S. capital pools so luckily we are going to be deploying U.S. capital. All the distributions are coming out of our current assets are U.S. dollars, so that has been a big win for our investors.”

Parkit sees the opportunity the fragmented airport parking business represents, but realized early in its existence it needed a domestic partner for the venture to make sense when it came to identifying potential acquisitions.

“It is definitely a fragmented industry, so those relationships are important,” said Baxter. “Knowing the industry and being in the industry is important so that is why we have partnered with experts in that field.”

Baxter was brought on by initial investors in what became Parkit. He has an airline industry background, having run an commuter aviation business for most of his career in British Columbia.

“It is all about yield and occupancy (in airlines) which is what we are driving in the parking sector as well.

From the early days, Baxter worked with Propark executives to learn the business and assembled a management team with investment and real estate backgrounds.

In September, Parkit acquired Expresso Airport Parking in Oakland for US$18.6 million, giving it a capitalization rate of 8.9 per cent on trailing 12-month net operating income of US$1.65 million. That deal was  funded with a new US$13.2 million first mortgage.

The fixed-rate loan bears interest at 5.4%, amortizes over 30 years and matures in 2019. US$5 million debt financing announced on Sept. 5, and US$400,000 in cash completed the transaction.

Parkit placed third in the Diversified Industries category on the TSX Venture 50 for 2015.