Perimeter Development is proving not all the action is in the GTA. The developer recently announced it has acquired a 12-storey downtown office tower in its home base of Kitchener, Ont.

Perimeter said it plans to modernize the building from the inside-out and turn the aging tower into a place where people want to work. 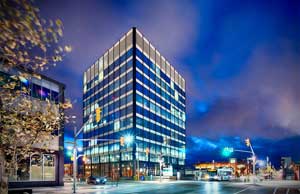 305 King Street West was constructed in 1968 to serve as Waterloo Trust’s Canadian headquarters. Architect Webb Zerafa – now part of the firm WZMH Architects (known for such iconic projects as the CN Tower and Toronto’s Scotia Plaza) – designed the building.

“We’re excited to breathe new life into the building and create a new style of office space for the market,” Craig Beattie, founding partner of Perimeter Development, said in a statement.

Planning to reverse a trend

Perimeter said that the trend has been toward “creative brick and beam office spaces,” and that aging office towers in the downtown core have seen a slight, but steady decline in demand. The developer said with 305 King, it plans to reverse that trend.

The building holds nearly 67,000 square feet of office space and plans include a restaurant and café for the main floor.

The building is very much in keeping with the developer’s style. David Gibson, a professional with more than 40 years in the North American retail, office and industrial market, established Perimeter in 2010 with an eye to uncovering under-used or vacant mixed-use properties primarily in city cores and refurbish and revitalize them.

The company has a track record of spotting buildings in the Golden Horseshoe and re-adapting them. One of its projects is downtown Kitchener’s Breithaupt Block, which contains 176,000 square feet of urban office space.

In mid-November, Perimeter won the 2013 City of Kitchener Mike Wagner Heritage Award for its work on the Breithaupt Block. The judging panel gave the award for the “rehabilitation and adaptive reuse” of the early 20th-century industrial building that once housed a rubber factory.

The panel cited Perimeter for taking “a complex of derelict buildings and transforming them into an unique office environment, thus contributing to the conservation of Kitchener’s industrial built heritage.”

In September, the developers entered into a partnership with the Zehr Group, a local tech entrepreneur and a local hospitality group to acquire the Walper Hotel in downtown Kitchener. The consortium plans to refurbish the property to become “a vibrant and exciting destination in the Waterloo region.”

Perimeter also acquired the Simpson Block, a  Kitchener building it liked so much it became its corporate headquarters.

The firm also did an urban redevelopment project in Cambridge, transforming a block of eight neglected buildings in the city’s Galt district. The firm has been working to turn the block into retail, office and residential, the latter in the form of luxury apartments.