The second phase of Calgary’s Oxford Airport Business Park (OABP) is underway,  as companies are operating in the first four industrial buildings already completed and there’s strong interest in the two vacant spaces remaining to be filled. 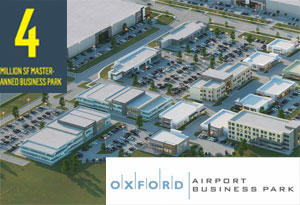 “It’s been a good year in getting through the leasing cycle and kicking off our next phase,” said Oxford Properties Group vice-president – industrial Jeff Miller. “The park’s really hit its stride and is gaining some good momentum.”

The park is located at 19th Street NE between Airport Trail and Country Hills Boulevard, 15 kilometres north of downtown Calgary and surrounded by suburban communities.

OABP is also 500 metres from the new entrance to the Calgary International Airport, which is undergoing expansion and renovation to handle its increasing traffic. This has helped trigger office, industrial and amenity development in the area and the growth will also result in an expansion of the existing transit line and the development of a new light rail transit line that will provide convenient on-site access for OABP occupants and visitors.

Construction of OABP’s first phase of buildings, all zoned for general industrial use, began in the fall of 2011. The initial development consists of four facilities totaling 923,000 square feet of leasable area on approximately 46 acres of land.

“OABP has been very fortunate to attract a wide array of customers, including transportation and logistics operations, manufacturing, energy and many regional operations for large organizations looking to distribute various consumer products,” said Miller.

All of the buildings were designed and built in line with Oxford’s “Sustainable Intelligence” platform, which incorporates energy-saving and environmentally friendly techniques, including: T5HO high bay lighting fixtures with motion sensors; energy-efficient fluorescent lighting; clerestory windows to allow in natural light; increased thermal insulation; landscaping using drought-tolerant local species; and the use of recycled and low-emitting materials.

“The benefit of embarking on a master-planned development is to offer flexible facilities and sizes that will attract a variety of different businesses,” said Miller, who added that space will be available at a range of lease rates dependent on size and the level of improvements requested.

Now that industrial occupancy has begun, Oxford is in discussions to launch an amenity retail component in the spring that’s expected to include up to 60,000 square feet of space for restaurants, fast food providers, coffee shops, a gas station and services.

Oxford’s original plans for the site included a conference centre and hotels. But with nearly 1,500 hotel rooms located within a five-minute drive and more coming online, that’s been put on hold.

Plans for construction of 500,000 square feet of build-to-suit office space on Airport Trail and Deerfoot Trail will be executed once users make a pre-commitment to OABP.

The company plans to implement strict energy, waste and greenhouse gas emissions practices for the space and achieve leading-edge sustainability with a LEED Gold certification.

“There is always a natural evolution of demand when developing a master-planned, mixed-use business park, and we expect to see the office demand follow the success of the industrial and commencement of the retail,” said Miller. “With very few choices and an expensive office market in downtown Calgary, we may see demand increase to the suburban markets.”

Oxford estimates the park will eventually have a daytime population of 10,000 employees.

Toronto-headquartered Oxford is wholly owned by the Ontario Municipal Employees Retirement System (OMERS), which manages nearly $90 billion of capital on behalf of the OMERS Pension Plan and other investors.

Oxford’s portfolio includes more than $27 billion of real estate assets it manages for itself and on behalf of its co-owners and investment partners. It owns and manages approximately 10 million square feet of single- and multi-tenant industrial buildings and plans to double that total through roughly equal measures of acquisition and development over the next few years.

“Calgary, Edmonton, Vancouver and the GTA are the four industrial markets that we currently operate in and, within Canada, that likely won’t change in the near term,” said Miller. “But we’re always considering entry into markets that make sense.”