Phyllis Lambert steps down, Bruce Kuwabara steps in to lead the CCA

Canada’s leading doyenne of architecture, Phyllis Lambert, has stepped down from her position as the chair of the board of trustees of the leading research institution and museum she founded. The Canadian Centre for Architecture announced in early December that Bruce Kuwabara will replace Lambert as the chair.

Lambert first made history as director planning for the Seagram Building (1954-58) in New York City and is recognized internationally for her contribution in advancing contemporary architecture. She holds honorary degrees from 27 universities in North America and Europe and is a Fellow of the Royal Architectural Institute of Canada, which also awarded her its highest honor, its Gold Medal. 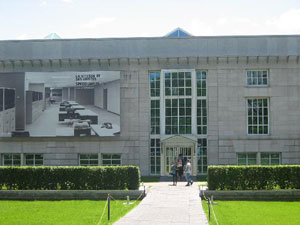 Lambert said she decided to step down, having accomplished the many goals she had set for the CCA. Since it opened its doors to the public in 1989, the CCA has become an international institution that promotes public understanding, widening thought and debate on architecture and its role in society.

Lambert intends to stay involved with the institution she founded and will remain on the board of trustees.

Lambert told the Montreal Gazette that she felt “a mixture of emotions,” on stepping down, but added that it was “absolutely the right thing to do.”

“This is so much of my life, to have led it for 35 years,” Lambert said to the Montreal Gazette.

Pierre-Andre Themens, vice-chair of the CCA board of trustees, said in a statement that Lambert had made an invaluable contribution to the local and international architecture community and to society at large.

Kuwabara has been an active member of the CCA board since 2007 and is a founding partner of KPMB Architects.

Kuwabara’s work in the architectural field includes the Le Quartier Concordia for Concordia University in Montreal (in image below); Canada’s National Ballet School; the Global Centre for Pluralism for the Aga Khan Foundation; and the Canadian Museum of Nature.

His current international projects encompass the Kellogg School of Management at Northwestern University; the Ronald O. Perelman Center for Political Science and Economics at the University of Pennsylvania; and the home for the departments of Economics and International Initiatives at Princeton University.

Architect Peter Rose designed the CCA’s building with Lambert acting as consulting architect and with associate architect Erol Argun. The new 130,000 sq. ft. office was integrated with the heritage designated Shaughnessy House, built in 1874 (shown in image above).

The new building houses exhibition galleries, a theatre, a bookstore, a library, a study centre and conservation and collection facilities as well as curatorial offices. The Gazette estimated the cost of construction back in 1989 cost between $40 and $45-million.

Mirko Zardini, director and chief curator of the CCA, said in a statement: “Over the past seven years, I’ve been most privileged to work with Phyllis Lambert in developing the mission of the CCA and strengthening its influence. I’m very happy to have the opportunity to continue to work with her and with Bruce Kuwabara in their new roles.”