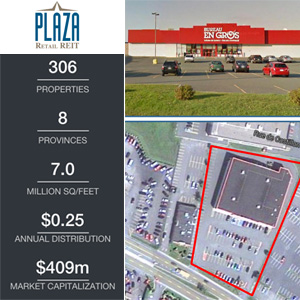 That is business as usual for the Fredericton-based REIT, which has carved out a healthy market niche for itself by redeveloping under-utilized, under-loved properties.

“We are not buying finished product, we are buying buildings to tear down, start from scratch or to reorganize,” said Michael Zakuta, president and CEO of Plaza Retail REIT (PLZ.UN-T), speaking from the ICSC conference in Toronto.

It is an activity regularly carried out by private developers but not something other public real estate companies have made a living on, he noted.

It is a capital intensive approach, and finding the necessary capital can be difficult. “Your product is broken, so that makes it a little more difficult to finance, and you have to fund it all before you are able to really fix it,” Zakuta said.

For Plaza, it can be more complicated than greenfield development, but is typically much faster to accomplish minus the delays that come from waiting for zoning and building approvals.

At the end of the day, Plaza will add approximately 103,000 square feet to its portfolio of retail properties based upon Plaza’s ownership percentage as five of the projects are being developed with joint venture partners.

The eight redevelopments are characteristic of Plaza’s skillset: namely its focus on redeveloping “under-utilized assets and expand our existing ones” while others real estate companies are “competing to acquire existing or finished properties,” said Zakuta.

Atlantic Canada remains the cornerstone of its portfolio, making up about 60 per cent of its properties, with a further 28 per cent in Quebec, 11 per cent in Ontario and one per cent in Western Canada.

“Ontario will grow, Quebec might grow a little bit. We are doing deals in Ontario, Quebec and Atlantic; it is important that we are occupied in all three regions. Western Canada is not a priority,” said the Plaza chief.

In some respects, Plaza is almost catching its breath after a busy 2014 that saw it achieve REIT status and consolidate its acquisition of Key REIT a year earlier.

Plaza also took advantage of the low interest rate environment to refinance $170 million worth of debt and renegotiate rates on about half of Key REIT’s debt.

The attributes Plaza looks for in potential acquisitions includes properties with a good base of existing tenants or tenants interested in the market.

“From there we look at the physical. Is it broken? How can we fix it in a cost-effective way and make money? If we can, we do a deal.”

“We continue to grow,” Zakuta concluded. “(There is) a lot in the pipeline.”