Canada has been a real estate sector star in the years following the international financial crisis, but that outperformance is fading to more average levels. 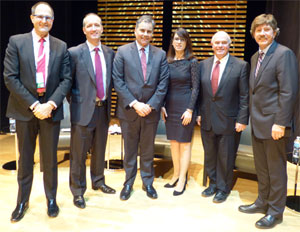 That’s the assessment coming out of the latest REALpac/IPD Canada Quarterly Property Index that found the index total return of 7.3 per cent  for 2014 (down from a total return of 11% a year ago). The survey also tallied a total income return of 5.2% and capital growth for the past year of 1.9%.

The results “confirms the slowing of the rate of returns in the marketplace,” said Simon Fairchild, executive director of IPD Canada.

The IPD data, drawn from 42 real estate players such as pension funds and real estate companies, represent about $125 billion of real estate and 2,351 assets in Canada. IPD estimates its benchmark, which has been in place since 1985, represents about one-half of the professionally managed real estate market in the country.

No surprise the lion’s share of the money went to Toronto, real estate’s centre of the universe for the past few years. In total, Toronto gobbled up $2.73 billion worth of net investment last year, well ahead of Calgary ($1.1 billion), Vancouver ($723 million) and Edmonton ($487.5 million).

The $5.5-billion result “indicates a strong degree of commitment, confidence in the real estate sector, and is actually the highest that we have seen since before the financial crisis in 2008,” said Fairchild.

In terms of development expenditures for 2014 ($1.99 billion), the map shifted westward while office continued to be the preferred asset class: Calgary came out on top with $576.1 million, followed by Toronto ($465.9 million) and Vancouver ($263.1 million).

The 1.99 billion earmarked for new development last year was a slight drop from the 2.3 billion in 2013.

The IPD executive director noted Canada’s performance is slowing from 11% last year to the seven per cent range this year, but that it remains an enviable result compared to most other markets around the world.

“The Canadian cycle seems to be on the wane and converging in on global norms,” said Fairchild. “I wouldn’t be surprised if the Canadian return was under the global index when it is released in April.”

That’s not terrible, he added, as the Canadian index has consistently outperformed the global real estate index since the financial crisis of 2008-2009. “You could argue that nothing lasts forever.”

Following the IPD/REALpac data presentation, a panel headed by REALpac CEO Michael Brooks, talked about the results and more about their outlook for 2015.

* Heather Kirk, managing director of equity research with BMO Capital Markets. was pleasantly surprised at the performance of retail assets given the threats of ecommerce and the uncertainty around Target’s planned exit from Canada. She’s bullish on public real estate, particularly REITs, after a negative 2013.

“What the market is telling us right now, from the capital markets perspective, there are not a lot of places to go that are feeling stable, in Canada with oil doing what we have seen it do. There is a lot more capital coming to the REIT sector.”

REITs should also get a push when they get their own sector in the Toronto Exchange index in 2016 and are no longer in the shadow of financials, she added. “It is a very big positive and it is definitely making a lot more investors who wouldn’t typically look at the space take a look at it and prepare for that index.”

* Stephen Taylor, vice-president of HOOPP Real Estate, said the IPD/REALpac top line number of 7.3% was “no surprise. If you think about it you are really getting your income yield plus the rate of inflation so it is pretty straightforward to think about it in those terms.” What is not in the IPD index to date, he added, are the Target retreat and the fall in the price of oil.

* Alain Dumaine, senior vice-president, global portfolio management and strategic planning of the Caisse-owned Ivanhoe Cambridge, acknowledged his company’s marching orders from its parent fund is to find more real estate to invest in, which presents a challenge in today’s unsettled markets.

“Yes, they would like us to increase the allocation, but from our perspective we still want to be disciplined, this is the first thing. And also, when you look at the different asset classes and you look at the currency, the risk premium, right now it is still attractive. On that basis, they want to hand us more capital, but now we are trying to find the right opportunities.”