Primecorp Commercial Realty has become an affiliate member of TCN Worldwide and added the Richardson, Texas-based consortium’s name to its moniker as part of their partnership moving forward. 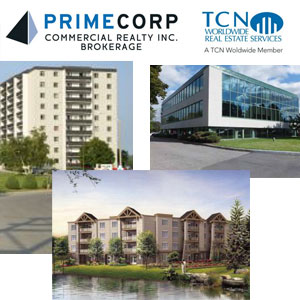 “Our mission is to provide tools and resources to the member firms and their brokers and salespeople to help them to become more successful in the markets where they serve,” said TCN Worldwide president and chief executive officer H. Ross Ford.

Aik Aliferis, chief executive officer and founding partner of the newly dubbed Primecorp Commercial Realty/TCN Worldwide, said his company has been looking for a global affiliation for the past year and he feels that this relationship will elevate the Primecorp brand on a national and international level.

“Their corporate culture is similar and their investment knowledge across the globe is quite good. We are really, really excited to be joining their team.”

Ottawa-headquartered Primecorp is a commercial real estate investment brokerage, management and advisory firm specializing in commercial and multi-residential investment sales, retail and office leasing, and property management. It has completed transactions worth more than $6 billion in more than 55 Canadian cities since its inception in 1998.

“Primecorp is capable, it has a great staff, a track record of expertise and longevity working with its clients,” said Ford.

Aside from Primecorp being able to expand its network and increase its resources, little will change under its affiliation with TCN Worldwide, according to Ford.

“The firms continue to do business very much in the same way that they currently are. They retain their own brand and their own identity. We have a number of firms that co-brand, but that’s not a requirement.

“The vast majority of them include the fact that they’re an affiliate of TCN on their business cards, letterhead and collateral materials, but there’s no legal change in entity. It’s not a purchase or anything along those lines. They are simply members of our organization.”

TCN Worldwide’s other Canadian affiliates are Montreal-based Terramont and Barclay Street Real Estate, which has a head office in Calgary and a satellite office in Edmonton. The consortium is now focused on finding affiliates based in Toronto and Vancouver.

“For our overall membership, it’s important that we have active brokers who aren’t just working on the investment side but also providing tenant representation and landlord leasing services in all of the property types directly in those markets,” said Ford. “Primecorp does that in Ottawa but they don’t really do that anywhere else, so there’s no conflict in that capacity.

“A Toronto firm obviously would bring boots on the ground, the local street knowledge, working with tenants as well as with landlords, and investment transactions in their own marketplace.”

TCN has picked up representation in Australia and Italy in the last year and is in serious talks with a group in Mexico City now as it looks to grow globally on what Ford calls “an opportunistic basis.”