For two-year-old PRO Real Estate Investment Trust (PROREIT), this month’s acquisition of seven commercial properties for a total of $40.5 million was nice, but what really puffed up the chests of the outfit’s management group was the fact the acquisitions were funded by a bought deal. 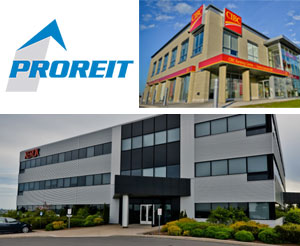 “We have been to the market since we started PROREIT three times and this is our first bought transaction with a short-form prospectus,” said Jim Beckerleg, president and CEO of the Montreal-based REIT (PRV.UN-X).

He added the bought deal means that “we have stepped across a new threshold. PROREIT is clearly demonstrating that it is capable of delivering significant, high-quality growth.”Rather than offering units to the market and hoping for the best, a syndicate of underwriters led by Canaccord Genuity Corp. stepped up and agreed to purchase 7,625,000 trust units at a price of $2.30

The REIT also granted the underwriters an over-allotment option to purchase up to an additional 1,143,750 units on the same terms and conditions for a 30-day period.

The offering proceeds will partially fund the acquisitions, fund the redevelopment of an existing property, pay debt and provide for general corporate and working capital. The offering is expected around June 9.

“This is a very important transaction for us, not only because it was a bought deal but because it lifts our asset base closer to $200 million and I think that increasing the size and breadth of your shareholder base is good for unit-holders over the long term,” said Beckerleg. (The asset base is currently valued at about $185 million).

“We have two strong industrial buildings in Etobicoke, well-leased, and we are pleased with that initial exposure,” said Beckerleg.

The two GTA properties are 100 per cent leased with terms of 8.4 years for Carrier Dr. and 2.2 years for Albion Rd.

The REIT’s president said observers should not expect the GTA deals to dramatically change the geographic balance of the portfolio in the future when it comes to upcoming acquisitions.

“I think our growth strategy is the same as we have been saying for the last year and a half. We see ourselves as we grow becoming a pan-Canadian, diversified commercial REIT but we have a historical focus on the Maritimes and Quebec from a history of deal-making in those provinces.

“We still find attractive price spreads (there). I expect we will continue to do more in the Ontario and later on in the West and we have some modest investment in Alberta now. But we still have pretty much a focus on the East.”

The seven new acquisitions, the product of a number of deals, are characterized by solid tenants under generally long-term leases: government and national tenants make up 85.8% of the acquisitions’ base rent with a weighted average remaining term lease of 7.7 years.

“One of the features that we also talk to investors about is that for a small-cap REIT, we have strong covenants and a strong lease profile.”

The company aims to take a diversified approach to its assets, currently holding about 40% in retail, 22% industrial and about 15% commercial mixed-use.

Beckerleg likes the “opportunistic” nature that comes with running a diversified REIT – namely the ability to buy property types at favourable times in their valuation cycle – in addition to the stability that diversification gives it.

“It is part of our broader diversification strategy which is especially important right now when you are a smaller-cap REIT because diversification is one of the things that strengthens the foundation of your monthly distributions.”

PROREIT has some development work on its books for some of the properties in its current portfolio, but it also intends to make further acquisitions this year.

“One of the big opportunities always for small-cap REITs is the benefits from external growth,” he said. “So we want to see ourselves still growing as long as we can successfully be supported by the investment community.”

The REIT likes to target smaller properties in secondary markets that are not currently the focus of larger REITs, he said.

“There are lots of opportunities out there,” he added. “As long as it is accretive and benefits the unit-holders, we will be back in the market this year. For the kind of properties we are buying, we see a lot of good opportunities right now.”

PROREIT’s growth is illustrated in its just-released first-quarter financials: total assets assets doubled in the first quarter compared to the three months ended March 31, 2014 as a result of the $65.6-million acquisition of 14 properties early in the fourth quarter of fiscal 2014.

The fourth-quarter acquisitions had a significant positive impact on first-quarter results, compared to the first quarter of fiscal 2014.