For an outfit focused on growth, there’s a lot to like in PRO Real Estate Investment Trust’s (PRV.UN-X) announcement this week. 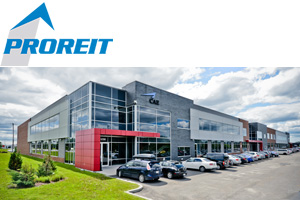 The Montreal-based REIT completed the acquisition of 14 properties for $65.6 million, more than doubling the size of its portfolio, raised $4.3 million through the issuance of class-B limited partnership units and, along the way, attracted a new strategic investor that could fill its acquisition pipeline in the future.

“We’ve effectively doubled the size in terms of square feet in properties to over a million while we have stayed with our previously discussed strategy of remaining diversified both geographically and across the different commercial spaces: industrial, office and retail,” said James Beckerleg, president and chief executive of PROREIT.

The closing of the acquisition comes after the REIT announced at the end of September it had raised $26.4 million through a public offering and concurrent private placement.

Proceeds of the September offering were used to partly fund the portfolio purchase, which Beckerleg said “will more than double our assets, cash flows, and gross leasable area, and further diversify our property and tenant profiles.”

As significant as the new properties will be to the REIT’s future growth, of more significance may have been the decision by Lotus Crux REIT LP to purchase 2,174,000 ProREIT units for approximately $5 million on a private placement basis.

Lotus Crux ended up with about a 14% stake in the REIT after the latest financial moves and its principals, real estate veterans Lotus Pacific Investments (LPI) founder Shenoor Jadavji and former KingSett Capital president Peter Aghar, will both take trustee roles. Jadavji has immediately joined the board and Aghar will become a trustee after the next annual meeting.

PROREIT’s Beckerleg said Lotus Crux’s “significant strategic investment” in the REIT makes it the largest institutional shareholder and should improve its future deal flow. “We hope to see a pipeline of real estate in which we can buy or invest in prior to buying.”

Lotus Crux, which is based in both Vancouver and Toronto, currently owns and manages more than $400 million of commercial real estate across Central, and Western Canada as well as the United States.

“They own substantial real estate for their own account and with partners,” said Beckerleg. “They will buy real estate that requires new development, turnaround situations, perhaps market improvement situations and the idea is their exit strategy could include selling to PROREIT in the same way that perhaps Crombie (REIT) (CRR.UN-T) works with the Sobeys group or Calloway (REIT) (CWT-UN-T) and SmartCentres.

“It should help our deal flow, absolutely, and we should have better access to capital with our increased market cap.”

As part of the investment, the REIT has signed a strategic investment agreement with Lotus Crux which it expects “will provide the REIT with enhanced coverage of major Canadian markets, especially in Western Canada, as well as access to Lotus Crux Acquisition’s network of relationships with real estate market participants in these markets, resulting in access to a pipeline of potential acquisition and investment opportunities not otherwise available to the REIT.”

Currently, PROREIT is predominately an Eastern Canada real estate operation with most of its holdings in Quebec and the Maritimes. It did pick up its first Alberta property in its latest acquisition, which will be a future focus for the REIT.

“We will be geographically diversified, we are very much focused on the Eastern markets we know, Quebec and the Maritimes provinces, although we have introduced some modest participation in the West,” said the REIT’s president. Growth outside its core, including into Ontario “will come,” he added.

Just how fast that occurs will depend on factors outside its control. “That is determined by the markets. When you are our size, we can talk about doubling over a fairly short period of time and I would certainly hope that we could do that over the next year.

“It ultimately depends on access to capital. Markets are somewhat improved from where they were a couple of months ago, so we look forward to it.”

The REIT’s focus will continue to be on retail, industrial and flex office properties, he said.

Post-acquisition, the REIT’s portfolio consists of 23 commercial properties totalling 1,044,095 sq. ft. of gross leasable area in Quebec and Atlantic Canada, and its first investment in Alberta.

The properties are mostly situated in prime locations within their respective markets, along major traffic arteries benefiting from high visibility and easy access, the REIT said.