Pure Industrial Real Estate Trust (PIRET) is off to a strong start to the new year with the announcement of $131.4 million worth of industrial property acquisitions with closing subject to conditions being satisfied.

The acquisitions consist of nine properties representing more than 1.5 million square feet of gross leasable space in Alberta and Ontario and a weighted average going-in capitalization rate of 6.89 per cent. 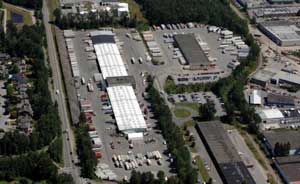 “There continues to be a robust pipeline of quality acquisitions coming to market and PIRET continues to be one of a small number of preferred buyers,” the company noted.

The purchases consist of three different properties. The first, in Ontario, includes two multi-tenant and three single-tenant industrial properties 100 per cent leased to international, national and regional tenants. The purchase price was $93.5 million.

PIRET purchased the second Ontario portfolio for $25.8 million. It consists of one multi-tenant and two single-tenant industrial properties and is also 100 per cent leased.

In Calgary, the property consists of a one, single-tenant industrial property that is 100 per cent leased and cost $12.1 million.

The company also announced that its president, Kevan Gorrie, has been named co-chief executive officer of the trust. Stephen Evans will continue on as the trust’s other co-chief.

Gorrie has served as PIRET’s president since 2012 and as a trustee since 2013. As president, he is responsible for acquisitions, asset management and the day-to-day business of the trust.

Gorrie has more than 15 years of real estate experience and has been involved in transactions totalling more than $1.6 billion in Canada, the U.S. and Germany.

“As president, Kevan has successfully led our asset management, property management and acquisitions teams through transformational growth,” Evans said in a statement.

“As co-CEO, Kevan will have an increased leadership role for PIRET internally and externally.”

Gorrie replaces former co-founder and co-CEO Darren Latoski, who died in 2013 following a battle with cancer.

PIRET owns 156 industrial properties in seven provinces. The company says it targets properties in primary markets and looks for clusters and asset sizes that will ensure economies of scale.

PIRET also looks for properties with strong tenant bases, low vacancy rates, and existing long-term leases as well as ones in good physical condition that require little or no deferred maintenance.

The company says it has made industrial real estate its focus because in recent years that market has been characterized by strong demand, tight supply, decreasing vacancy rates, increasing rents and decreasing capitalization rates.