Edmonton-based SpruceLand Properties has a decades-long history, a famous former president and a record of steady growth. 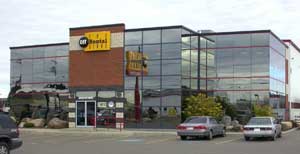 What it doesn’t have yet is the scale required to achieve its goal of public company status.

“Ultimately that is where we will end up, doing an IPO or acquiring a listing in some fashion,” said SpruceLand president Steve Cribb. “But I think we feel that we need a certain size before that really becomes feasible.”

In the meantime, obtaining more capital to grow will likely take the form of a private placement to find more investors.

“If we wanted to grow quicker and we do, we will have to look at raising capital,” he said.

Spruceland currently has approximately $100 million in assets and holds a diversified portfolio industrial, retail, office and manufactured home parks. Its properties are mainly clustered in the greater Edmonton area, with the rest in Calgary, north central Alberta, B.C. and Saskatchewan.

Currently more than 50 per cent of its holdings are in residential with another 30% in residential in the form of two manufactured home parks with the balance in retail and office holdings.

It’s also active on the acquisition front. Earlier this month, it announced the acquisition of a new industrial building in southeast Edmonton after having recently acquired a development site in west Edmonton. The Edmonton industrial building purchase was made through a joint venture which will see SpruceLand owning 50%. The purchase price for the 52,500-sq.-ft. building is $14,925,000.

“These properties, and two others purchased earlier this year, reflect the continued success of SpruceLand’s growth strategy,” Cribb said in a media release. “All four properties are or will be new or near new, are prime assets in a good market.”

Cribb, who was hired on as president in 2006, said SpruceLand’s growth “has been pretty significant. Since I have been here, we have sold off a number of older properties and acquired newer properties. So we probably haven’t quite doubled in that time frame, but close to it.”

The SpruceLand president said he believes his company would need to double or triple in size before it realistically could pursue public company status.

“He was the original president before he embarked on a political career,” Cribb said of Preston Manning.

Currently, the company has more than 300 shareholders and is officially a private company for tax purposes although it releases its financial results semi-annually as a reporting issuer to the Alberta Securities Commission. “We have all the burdens and none of the benefits,” he said wryly.