R2Crowd bringing RE investment to the masses

Crowdfunding for real estate investing is a proven platform in countries such as the United States and Australia, so its introduction in Canada is actually overdue. 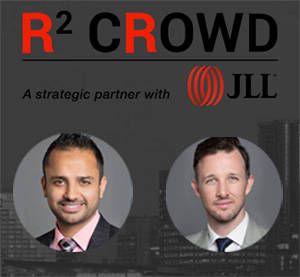 At least that is what Amar Nijjar and Chad Gemmell thought. The two real estate veterans recently launched R2Crowd, which they describe as the first national crowd funding platform in Canada.

The JLL executives started the project last year during a flight to a real estate conference.

“We thought about where this business was going in the next five to 10 years and we started talking about Uber and taxi cab industry, AirBnB to the hotel industry,” said Nijjar. “We basically took some of the initial concepts from the U.S. and started tracking it and here we are.”

Where they are today is set up in partnership with JLL Canada “which brings a lot of credibility to the platform,” said Nijjar.  R2Crowd has been set up as a division of Waverly Corp., an exempt market dealer in key provinces such as B.C., Alberta, Ontario and Quebec.

Nijjar likes to say R2Crowd “democratizes the access to deals.” With investment minimums as low as $2,500, it certainly brings real estate investing to the masses.

“The stock market has been volatile, there are geopolitical risks, fluctuations to oil markets, so people have really bought into this idea elsewhere in the world. Now you are investing directly into a property so you are shielded from the vagaries of capital markets.”

Its website (R2Crowd.com), currently showcases nine investments across Canada and across different categories that will go live in January.

“You will be able to go into any of them and invest anywhere from $2,500 to whatever you want and build your own portfolio of investments,” said the platform co-founder. “There is no maximum, but we expect that most of the investments will be $2,500 to $100,000 a pop.”

The founders bill it as the first crowdfunding platform that is national and “sponsor-agnostic” meaning it is not acting as a developer itself but rather as pure intermediaries.

The startup is counting on the proven popularity of the crowdfunding format in the U.S. and the hunger of many small investors for a direct real estate investing vehicle.

Direct real estate investment has pretty much been limited to high-net-worth investors with a few spare millions to plunk down on a strip mall or for part of an apartment building. “Individuals like us don’t have that kind of capital to buy a plaza and then to manage it.”

He said the opportunity will be presented to small investors as a long-term investment – anywhere from two to seven years.

Small investors working through R2Crowd will comprise just a small percentage of the money flowing into a property investment under the funding structured envisioned by Nijjar and Gemmell.

“The idea is to bring qualified sponsors to our affiliation with JLL and then rigorously underwrite the deals, rents and market cap rates. Get the senior debt, and then get the equity piece syndicated where the principal has skin in the game of a minimum of 25 per cent of the equity.

“The remaining 75% of the equity is people like you and me and some institutions.”

Nijjar provides the example of a $10-million property investment or “capital stack.” Most (roughly $7 million), would be comprised of senior debt, with the $3 million of equity split between the sponsor ($1 million) and $1.5 million from accredited investors and the remaining $500,000 from the crowdfunding platform.

“It is important for us to push the crowd because we really want the general public to have access to these deals,” he said.

R2Crowd’s current portfolio of nine deals that come live in January are a mix of small retail, student housing, multi-family and condos. “We have property in B.C., in Brampton, secondary market in Brockville (Ont.), we have Calgary,” said Nijjar.

The founders believe retail and multi-family will be most popular with crowd investors.

“Retail, people really like because it is easy to see. I think industrial buildings can be really hard to understand. Office building . . . there is transparency. Apartments, multi-family is always the sweet spot because in Canada with rent control and some other elements, we don’t have too much oversupply.

“We are going to shy away from condos unless it is a really good project and sponsor. There is a lot of product out there.”

Nijjar expects the first year will be more focused on attracting large numbers of registered users to widen and deepen the investment pool.

“Our first-year goal is really to have as many registered users as possible and do the education so we are participating in conference panels.”

He expects $15 million to $20 million worth of deals “can be easily raised through this channel which is above and beyond any senior debt.”

The co-founders’ backgrounds and continued ties to JLL Canada also mean they have extensive networks and access to a flow of potential deals.

“We already have about a dozen deals of different varieties that are lining up and we haven’t even gone to the market in a broad manner to say we will raise capital for you.”