Although there was plenty of gloom at Wednesday’s RealREIT conference in Toronto, Carolyn Blair, managing director of RBC Capital Markets’ real estate group, did have some good news as well. 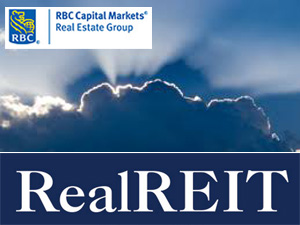 However, there are a lot more dogs in the REIT/REOC pound; unlike last year when two were in negative territory, 29 of 56 are in the red so far in 2015.

Seniors housing was the best performing real estate class with a total return of 14 per cent over the last 12 months. Last year’s leader, hospitality outfits, are in the basement with total returns of minus five per cent.

Blair’s stars are REITs that can deliver a solid return over a “very long” period of time. By that measure CREIT (REF.UN-T) and RioCan REIT (REI.UN-T) has delivered total return CAGRs (compound annual growth rate) of 15% over a 22-year span.

In other words, a buck invested in 1993 is worth 22 times that today. There are seven other REITs that have managed to eke out a CAGR of 15% or more over a decade or longer.

Are REITs a good investment now?

Blair finished her presentation by looking at REITs in a rising (at some point) interest rate environment. Her analysis is that over the past 15 years, the expected correlation between bond yields and the REIT index is only .25%, or in other words, bond yields only explain changes in REIT values in one in four cases.

So the oft-cited inverse relationship between interest rates and REIT performance is less powerful than most people believe, she concluded.

“So why is this? Probably, maybe just me thinking, because investors after getting over the trauma of interest rate hikes settled down and realized that one, good REITs have long (weighted average term to maturities) and staggered debt  maturities, so the effect of interest rate increases will take years to matter.

“And two, unless you have Greek-like credit issues, rising interest rates are often linked to stronger economies, which allow rental rates and occupancies to increase, both of which are good for REITs.”

She concluded “REITs are much more linked to the fundamentals of the economy than they are to interest rates. So maybe we should not be fearing the Fed, maybe we should be cheering the Fed and hope that liftoff, whenever it occurs, also brings good news to our Canadian economy.”

Back to whether today is a good time to buy REITs, Blair dropped some facts and figures on attendees and left it for them to decide.

She pointed to historical spreads to 10-year bonds (“very comfortably ahead of the average”), forward AFFO multiples (average but well below the 2007 high) and discounts/premiums to net asset value (currently a 10.5% discount to NAV).

The discount to NAV has been this low only about six per cent of the time, she added.

It is also worth noting most REIT IPOs occurred in periods when REIT valuations were averaging more than five per cent above the net asset values.