RBC gives building a second life as its Halifax headquarters

Hailed as a “spectacular building,” the newly opened RBC Waterside Centre in Halifax has also been one of the more contentious projects built in recent years in the port city. 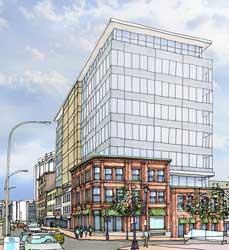 The new 100,000-square feet centre is the new home of RBC’s regional headquarters. Built by Halifax-based The Armour Group, the nine-storey building is LEED Gold certified and cost approximately $25 million to build.

“It’s emblematic of the type of buildings we try to do, which are buildings that can have a sense of place within the community, and I think the greatest testament is the reception it’s received within the marketplace,” Scott McCrea, CEO of The Armour Group. “It’s been positive.”

The triple-A class building is already 80 per cent leased. The ground floor contains some 11,000 sq. ft. of retail, including RBC’s main bank branch, while the rest of the building holds offices.

Some of the sustainable features in the building include a loop cooling system via sea water drawn from the nearby Halifax harbour, full heat recovery HVAC systems, natural gas high efficiency boilers and occupancy sensors.

McCrea said given tenant demand they could have easily doubled the size of the building to 18 stories, but Halifax’s view plane regulations designed to protect waterfront views prevent the development from being any higher.

One of the largest challenges, in more ways than one, was preserving the facades of six pre-Confederation buildings. Originally, the block – which Armour Group owned as part of its Historic Properties development and redeveloped in the 1970s – was part of the Nova Scotia College of Art & Design (NASCAD).

But McCrae said the block was no longer capable of satisfying the users’ needs and the company saw an opportunity to again redevelop the property. NASCAD had left the buildings to move to a new waterfront campus. “Really, that site is almost centre ice within downtown Halifax,” he said. “We saw and had demand from clients and moved forward from there.”

Although the project was conceived in 2006, it would take until 2011 before it began to move forward. A battle broke out between the developer and civic conservationists who objected to the preservation of only the building facades and indicated they’d rather have the entire structures kept intact.

For his part, McCrae professes to be a big proponent of heritage, but says buildings need to have second lives, grow and change, but still be maintained. To be sure, a number of The Armour Group’s previous developments have won civic, national and international awards for preservation, including the Historic Properties and Founders Square. The latter is a 16-storey building that preserved a block of historic facades as part of the development – much like the Waterside Centre.

Ultimately, the development went to a vote before city council. In a split vote, council rejected the development after the mayor excused himself from the vote. An appeal went before the Nova Scotia Utility Review Board, which found in favour of the project, ruling the city and the Heritage Trust had interpreted civic planning strategy too narrowly.

McCrae said he didn’t really learn anything new from the battle, which he calls an “anomaly in time.”

“The thing that we’ve learned the most is it’s refined our belief that the office market is going to very quickly and quite dramatically moved toward what we describe as ‘new age’ buildings, ones that are meeting the new format of national and international clients and that the functional obsolescence of older buildings is a real threat.”

McCrae noted that while class-I buildings may not be all that new for Calgary or Toronto, those types of premises are something different for Halifax. “There’s a lot of satisfaction that users truly realize the difference between what we have produced and 25-year-old product that is the rest of the city,” he said.

The one thing that did surprise the developer is what he describes as an almost conflicting element between LEED and environmental sustainability when it comes to maintaining heritage structures.

Much of the older brick and beam elements McCrae had hoped to leave exposed had to be covered up with new interior walls in order to reach certain energy models. “You would think that saving and reusing building components would add to your LEED scores in terms of sustainability,” McCrae said.

“It actually works against LEED and LEED has really not brought itself forward to the unique situations where heritage buildings are being incorporated, in my opinion.”

With Waterside Centre completed, The Armour Group is now turning towards other projects. Earlier this year, it bought the former Blackberry headquarters and 50 acres in Bedford for an undisclosed price and plans in the next month to announce a new business campus there.

At the foot of George Street on the civic waterfront, the developer intends to build the Queen’s Landing Project, which it will announce in the next five or six months.