For the real estate sector, 2014 can be categorized as “OK.” 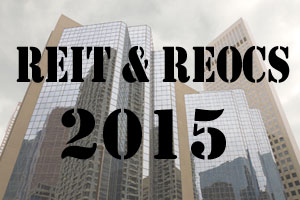 Yes, Canadian REITs legged out a total return of 10.4 per cent over the year, but homegrown real estate trusts recorded “significant” underperformance compared to most REITs.

That observation, at the start of RBC Capital Markets‘ 300-page REIT market outlook, comes with the conclusion 2015 should be a better year for REITs and their investors as, logically, they can’t be shout out of the party two years in a row for no good reason. So get out the party duds.

“In short, we believe the lagging 2014 performance has created a valuation-based opportunity for better relative and absolute performance in 2015.”

Who wins, who loses?

The RBC report, authored by a six-member team of analysts headed by Neil Downey, sees sector performance from best to worst in 2015 led by hotel/lodging, industrial, multi-family, senior housing, retail (on the watch list on with certain tenants) and office, which looks poised for a rock year.

Similar to RBC’s year-earlier outlook, it taps the office sector as the only one at real risk for declining same-property income.

Diving into the anticipated weakest sector, the report states modest economic growth will drive office demand but the 20-million-square-foot pipeline of new buildings in progress leads to excess supply for the next two years or longer.

The introduction of another four per cent of space to the national inventory of 500 million square feet is also coming in a rush, with about 75% of it arriving in the next two years. It is also geographically concentrated: coming mostly in the central business districts of Toronto, Calgary and Vancouver.

RBC takes a “steady-as-she-goes” view of the retail real estate sector, underpinned by a “moderate” growth outlook for the Canadian economy. Retail REITs and real estate operating companies have evidenced stability and the sector’s weighted average occupancy rate has remained unchanged since the end of 2013 at 96.1%.

There are risks, though, in the form of e-commerce, and rising home prices and household debt ratios.

RBC terms new supply a “trickle” or 10.7 million square feet of retail GLA currently under construction, or approximately 3.1% of Canadian retail GLA located in 10 markets nationally. Regional mall expansions and power centres account for the largest percentage of GLA under construction, with each representing about 29% of GLA, based on CBRE data.

RBC notes “solid demand and scarcity” of new class-A industrial product has meant developers have pumped up new construction “to what now appears to be an all-time high.” As of the third quarter of 2014, there were nearly 19.4 million sq. ft. under development nationally.

The investment firm stated more than half the new projects are build-to-suit, suggesting much of the new construction is driven by specific tenant demand.

Overall, the report forecasts industrial market fundamentals will remain “healthy” in 2015 driven by: GDP growth across all provinces; solid demand generators within the e-commerce and distribution channel (with some offset due to slowing growth from U.S./foreign retailers in Canada); the benefits of weaker $Cdn/$US exchange rate (for exporters) and the “pull” of stronger U.S. growth; and, weakening oil prices, which could reduce the significance of prior West-versus-East regional disparities.

RBC identified seven themes it believes will dominate 2015:
1) Steady investment volumes as REITs and REOCs likely to hold modest share and produce 2014 investment property trading volume of between $26 billion to $27 billion range, roughly flat versus 2013’s $27 billion. Expect 2015 direct market turnover “flat, to down modestly,” at $25 billion;
2) Modest equity issuance –  2014 public-equity issuance totaled $2.3 billion, down 52% year over year, and below RBC’s forecast of $3 billion-plus. For 2015, it forecasted about $2 billion of equity and equity-related capital to be raised by listed REITs and REOCs;
3) Strong debt origination. RBC forecasts REIT and REOC unsecured debt issuance of $3.5 billion to $4 billion in 2015, down from $5.5 billion last year, but strong compared to prior years.
4) Some fair value markdowns in a “grind-it-out NAV-growth environment.” In 2014, RBC’s REIT and REOC coverage universe recorded estimated net fair value marks of $0.7 billion, down around 40% from $1.2 billion in 2013. Included were $0.2 billion of fair value markdowns (double the 2013 figure), mostly related to office properties. This year, expect some downward marks in suburban office properties, and in certain properties located in secondary and tertiary markets, particularly those with energy-dependent economies;
5) U.S. exposure should still help. Last year was a good one for REITs with “foreign-portfolio listings.” A combination of valuation, growing and constructive track records, M&A, and currency moves (U.S. dollar plays), the group posted a simple average total return of 23% last year, more than double the 10% from the S&P/TSX Capped REIT Index. Expect more of the same this year;
6) Will they stay or will they go? Timing was not kind to RBC’s Jan. 9 report, coming just before Target announced its Canada pullout. The report warns Sears may be the more logical big foreign retailer to exit the country;
7) M&A activity, same. Last year, there were four Canadian REIT/REOC merger and acquisition transactions with only one an “impact” deal with a  multi-billion dollar enterprise value. RBC does not see the conditions for a “significant” increase in M&A this year and instead expects “a handful of smaller company-to-company or go-private deals.”