In its latest quarterly REIT report, RBC Capital Markets explores a subject that should interest most investors: what does it cost to run a REIT. It also considers growing market risks and how Canadian REITs stack up internationally. 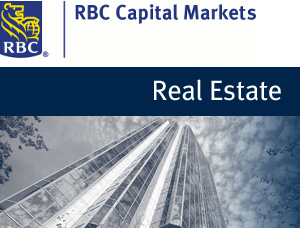 For real estate head honchos, and investors, it turns out that the answer provided by RBC analysts Neil Downey and Michael Smith is generally a positive view of the Canadian REIT / REOCs sector.

RBC comes to a trio of conclusions regarding the costs of real estate investment trusts (REITs) and real estate operating companies (REOCs):

1) they “offer a low-cost means to invest in real property;”
2) REIT/REOCs “overall costs of management are also favourable versus many managed investment alternatives;”
3) and finally “REIT/REOC total returns stack-up well over time.”

The RBC report examined the A-MER, stands for Adjusted Management Expense Ratio, which includes general and administrative expenses for different types of REITs and REOCs and compared it the the A-MER (or similar measurements) for other types of real estate investments.

RBC found the average 2014 A-MER for a core property REIT or REOC was 122 bps, and the overall REIT and REOC average was 134 bps.

The investment firm found that the average 2014 A-MER for the operating REITs and REOCs (389 basis points for seniors housing and 365 bps for lodging) are materially higher than the overall REIT and REOC average (134 bps).  It said the difference may in part be because of  “management intensity and/or complexity of the business, and we also strongly suspect that differences in financial statement presentation standards and capital structures play a role.”

The firm noted that the S&P/TSX Capped REIT Index has posted a five-year annualized total return to the end of 2014 of 12.7% ahead of the 11% average return of real estate-dedicated mutual funds, the 9%-area returns of direct and private real estate investment funds, the return from the S&P/TSX Composite Index, and 5–6% returns from the average Canadian equity fund.

“We believe the low average A-MER borne by REIT and REOCs investors must inherently be part of this cost versus return equation,” RBC concluded.

While it wasn’t a focus of the latest report, the RBC analysts noted that it “is becoming increasingly evident in our minds  that the risks to the top-line forecasts (revenue and NOI) seem to be, if anything, building.”

As evidence of growing risk the firm cite a consumers who “has seemingly not yet stepped up spending at the cash register,” a first quarter GDP decline of 0.6% and continued weakness in April’s GDP tally.

Piled on top of the weak economic growth picture, RBC sees specific challenges for absorption and rents in the commercial real estate sector by sector and region:

1) a substantial supply-side pipeline in the office sector;
2) rapidly rising office sublet availability in Calgary;
3) a significant amount of retail space coming back to the market on the heels of Target Canada’s failure and the downsizing of some other retailers (e.g., Future Shop);
4) sharp deceleration of the US retailer “invasion” coupled with high rates for growth in on-line sales;
5) a weaker Canadian dollar;
6) increasing construction of multi-dwelling residential units, including more purpose built rentals;
7) strong urbanization trends.

Grading the relative strength of sectors this year, RBC taps hotel/lodging as providing the best returns over the near term, followed by industrial, multi-family, senior housing, retail, and finally, office.

On an annual basis, “trend-line” earnings growth in 2014 came in at 4%, below the 2013 return of about 5% trend-line earnings growth and in-line with the long-term historical average of 3–4%.

RBC has a 2015–2016 aggregate or “trend-line” FFO/unit growth estimate of 4% annualized, which has been “holding remarkably constant for a number of quarters now.”

RBC warns that macro-economic conditions “may be set to weigh on the top line and NOI growth outlook for some property companies” with the expectation that contributions from acquisitions will also be negligible for most.  That said, the “top line pressure” could be offset by favourable credit conditions and interest rates, with the listed property sector in position “to accrue greater savings on interest rate financings than we had previously anticipated.”

Internationally, however, Canadian REITs did not do too badly:  Asian REITs were the strongest regional performers eking out a second-quarter return of 0.2%, followed by returns of ‐6.7% from European REITs, ‐6.7% from the Global REIT Index, and ‐10.0% from North American REITs.