A year to forget for most REITs: RBC

Ultra-low interest rates aside, it has been a tough 12 months for the REIT sector. 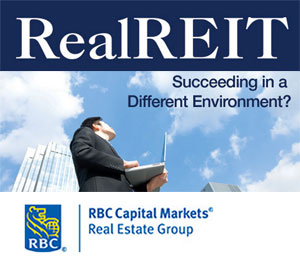 Carolyn Blair, managing director of RBC Capital Markets’ real estate group, laid out the grim (and some good) statistics at the RealREIT conference in Toronto on Wednesday:

1. There has been only one REIT initial public offering since CT REIT (CRT.UN-T) (October 2013);

2. REIT ranks are thinning; M&A transactions took two off the board, HealthLease Properties REIT and NorthWest Healthcare Properties REIT (NWH.UN-T), True North Apartment REIT will be swallowed up by Northern Property REIT (NPR.UN) subject to unit holder approval, and Amica Mature Lifestyles Inc. (ACC-T) has been acquired by a unit of the Ontario Teachers’ Pension Plan Board, again contingent on shareholder approval;

3. There have been no REOC to REIT conversions in over a year;

4. The equity raising environment is moribund a notable change from record fund raising years that are still in recent memory.  In 2013 REITs on the TSX raised $9.7 billion,  $2.5 billion in 2014 and there has been just $1.6 billion raised so far in this calendar year.  Blair noted 2013 was unusual with the mega retail property spinoffs by Loblaw Cos. to create Choice Properties REIT (CHP.UN) and Canadian Tire Corp. with CT REIT (CRT.UN).

The RBC executive has a good explanation for equity raising inactivity.  First blame a lull in the IPO market which has gone from 17 real estate IPOs in a 20-month span ending in 2013 to zero in 2014 and one successful IPO of two attempted this year.

The cause of the lull? The IPO math doesn’t work according to Blair as the public markets are paying less for properties than the private markets even before taking into account related transaction costs.

“Fund flow and interest rate concerns have likely contributed to REITs trading at less than NAV since mid-2013,” she explained. “This has had two consequences, the math often doesn’t work on acquisitions and secondly, many management teams have elected to focus on internal growth, including development, which tends to need less equity.”

The performance of the new class of REITs (now at 16) is also a factor as only half are trading above their issue price a full two to three years after their IPO.

It is not only IPO volume that’s dragging, other issuances from the mature REITs are also down significantly.

Nevertheless 18 of 42 Canadian REITs have raised $1.2 billion in equity, according to RBC figures. Perhaps to compensate, the unsecured real estate debt market reached an all-time high in 2014, raising $5.5 billion.

REIT performance has been nothing to write about for unitholders, with losses of 2.7 per cent year to date (end of August) and off 4.3% over the last 12 months,  versus declines of 3.5% and a loss of 8.7% for the TSX composite index over the same two periods.

Over the last eight and 12 month periods REIT performance has been less than bonds.  Viewed by the five-year CAGR (compound annual growth rate) however REITs shine with returns that are “significantly higher” than Canadian bonds and the TSX overall.

While REITs may currently be experiencing a slump in their performance for many years they have exceeded expectations.