The winner of the longest Canadian federal election campaign in history will be declared in four days, and there doesn’t seem to be a clear-cut favourite with regards to platforms affecting the real estate industry. 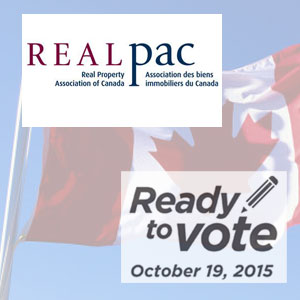 “When parties talk about how infrastructure impacts sustainability and how taxes and finance impact infrastructure, you see all of these things put together,” said Barnett.

“I think the parties have a great understanding of how all of these issues mesh together. That’s very good for our industry. It seems like there are some willing partners and some open-minded thinkers behind the party platforms, which is encouraging.”

REALpac compiled a chart of party platforms on the three key topics and sent it to its members.

“REALpac is non-partisan and we work with all governments, all parties and all mayors regardless of political stripe,” Barnett emphasized. “There seems to be a lot of the same end-game goals; the parties are just using different tactics to get there.”

Achieving these goals involves different taxation policies, approaches to childcare and Old Age Security benefits, and Canadian Pension Plan contribution levels from each of the three major parties. Barnett, however, is encouraged they’re talking about prioritizing infrastructure spending on such things as public transit, transportation, schools and affordable housing.

Part of that $60 billion from the Liberals is earmarked for “green” infrastructure such as water treatment plants, clean energy, “smart cities” and climate change.

“There’s a divergence among the parties on the environment and climate change,” said Barnett. “The NDP are promising a national carbon pricing mechanism, which is something that the Liberal Party is leaving to the provinces.

“We’ve been monitoring that effort from coast to coast provincially for the last eight months or so. The Conservatives aren’t favourable to any kind of carbon pricing strategies because that could be an additional financial burden on industries. That’s something that we’re watching and seeing how it might impact our industry post-election.”

REALpac has identified various principles it believes should underpin any carbon pricing model under consideration, and it listed a number of recommendations in a policy discussion paper published in May.

“Governments should be careful not to enact solutions in search of a problem,” the paper noted. “The success of any carbon pricing program will depend on how well-connected a system is to the respective government’s sustainability goals.”

Whichever party comes away victorious on Oct. 19, it should be remembered the real estate industry is generally more affected by decisions made at the provincial and municipal levels of government.