ReDev Properties Ltd. has completed leases with Dollarama stores at two of its Alberta shopping plazas. 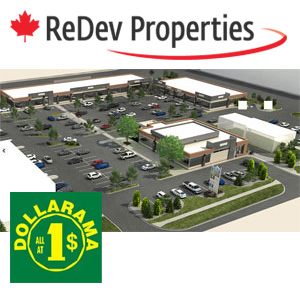 “When you have big tenants like a Dollarama come in, it confirms the viability of the centre to other potential tenants,” said ReDev president Richard Crenian. “Dollarama pulls in tenancies for us because they know they generate traffic.”

Dollarama (DOL-T) is Canada’s largest dollar store operator, with more than 900 locations across the country. Within the next three to four months it will open a 9,727-square-foot outlet at Kensington Commons in Edmonton and a 9,000-square-foot store at Inglewood Towne Centre in St. Albert. Both are in established in-fill residential areas with appropriate demographics.

Dollarama was previously in the centre, but was forced to close after a fire. Its lease had come up by the time the mall was rebuilt, so ReDev directly negotiated a new deal for the discount retailer to move into a new building.

ReDev is in the planning process for an additional 7,000-square-foot building at the property and a remaining 10,100 square feet are available for lease. Crenian said the new pad will be in the best location on the site so he’ll be charging a premium price once construction begins in the spring.

He suggested it would be appropriate for a bank or credit union along with a food outlet. ReDev is in negotiations for the remaining space at Kensington Commons and Crenian expects it to be filled by three or four tenants.

“All available space is now under offer,” said Crenian. “We have offers on every space and it will be 100 per cent leased subject to us signing all of the deals back.”

Toronto-headquartered ReDev owns Bella Vista Plaza in Windsor, Van Leeuwen Plaza in Ottawa, Dixie Road Plaza in Mississauga and Imperial Square in Guelph, Ont. It also has 19 retail properties and one office building in Alberta. Most are in the Edmonton area, where Crenian hasn’t seen a slowdown due to the drop in oil prices, although the more energy-focused economy of Calgary has experienced an eased demand for retail space.

“I always like to choose a site that’s able to withstand market fluctuations if I can,” said Crenian. “A lot of times you don’t know for sure, but I’ve been doing this for 30 years so hopefully I’ve picked up some market acumen.”

Crenian said he’s made good money in Alberta over the years despite an economy that he’s seen go up and down. Even though he sold two Alberta properties earlier this year, he remains committed and has no doubt the province will recover from its current sagging state.

ReDev has two projects under contract which are not yet finalized, but Crenian added the company’s focus is on retail properties in bigger markets with growth potential because they’re easier to get to.