The Canadian REIT markets’ fall from grace since May of 2013 was the backdrop for the final panel discussion at this year’s RealREIT conference in Toronto. 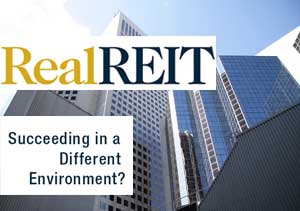 Since a boost in bond rates put a chill on the sector last spring, REIT executives are adjusting to a new norm where capital markets and investors are favouring foreign real estate, mainly in the U.S., and other types of investment.

The result has been a reshuffling of REIT priorities with renewed emphasis on operations and development as well as a sober weighing of the risks and opportunities that lie ahead.

“The whole industry is getting much more focused on marginal gains,” said Michael Cooper, Dream Unlimited Corporation‘s president & CEO. “A bit of it comes from development, a bit from operations, better technology.  Everyone is on a flat surface . . . not tailwinds . . . not big ideas.  It’s all about execution.

“The industry is doing a much better job for the customers and their shareholders.  It takes a lot of work to move the dial.  That is a big difference.” Cooper added “Interest rates are low and have almost not changed for about 10 years. That’s cool.”

In 2009, capitalizing on market conditions created by the recession, Riocan REIT (REI.UN-T) ventured into the U.S. on a buying spree. Over the course of four years it assembled a U.S. portfolio that comprised 47 properties with nearly 10 million square feet of net leasable area that now represents 20 per cent of the REITs total portfolio by square feet.

Reflecting on that time, Riocan REIT president/COO Fred Waks said, “Eighteen months ago we could buy a billion dollars worth of real estate; that was still out there. It was accretive. It was very easy to run portfolio integration.

Investor pullback from REITs is not due to a change in market fundamentals, a failure of REIT operations or management, according to the Riocan executive. “These big movements are beyond our control and have nothing to do with operations,” Waks said. “We all have great management teams. The bigger markets make decisions and we are not the centre of the universe.

“We will not be in this position forever. There will be a shift in the market and REITs will come back into favour.”

In the meantime, Riocan and DREAM are both pursing development projects and analyzing the development potential of their portfolios as a way to generate growth internally. Riocan has more than 44 sites it is considering for development, 10 of which are active files according to Waks.

Cooper said DREAM’s development pipeline, which operates outside of the public company, has about $400 million in projects underway.

New York-based Kimco Realty is a long-time partner of Riocan’s in Canada, and owner of the largest portfolio of neighbourhood and community shopping centres in North America.

Kimco president/CEO David Henry made numerous cautionary statements about the real estate market in the U.S. and the REITs current situation while speaking on the panel at RealREIT.

Henry highlighted the difference between what happened in Canada and the U.S. during the ‘great recession’. “It really hit REITs hard. We were in pure panic mode. We were scrambling to convince investors that we could pay mortgages that were five years out. It was a very dicey time.

One of the defensive strategies Kimco has employed is to establish a significant line of credit. “We have a 1.7-billion line of credit that goes out five years at a rate of less than one per cent that is an insurance policy, not as a source of capital,” Henry said.

Good time to sell in U.S.

Henry said historically low cap rates in the U.S. make it a good time to sell, particularly if you are concerned about any of your assets.

“We are aggressively disposing of assets in secondary markets,” Henry said. “It is also a good time to borrow. We are refinancing any mortgage that isn’t nailed down and we are also issuing bonds as quickly as we can and even preferred stock.

“What is a lot greyer is whether this a time to buy. Most of the public REITs in the U.S. were forced into a box (during the recession) where we were only to buy the very best assets in the very best markets.  Prices of those assets are astronomical now with cap rates breaking five and high fours.  It is very hard to make the numbers work and have it be accretive when prices are that high.”

It is definitely not a time to rush into the market.

“In the U.S., you have to go in with your eyes wide open and be aware that you are buying at the top of the cycle,” said Henry. “There are opportunities with the recovery of the retail sector because retail rents are currently 20% below the peak experienced in 2007 and there are now higher occupancy levels.

“The properties that are benefiting from the recovery are also the ones that are the most expensive. It is a time to be careful.”

“We are recycling capital into our own property. We have 840 shopping centres, so we have a fair number that can be redeveloped, “ Henry added.

One member of the a RealREIT panel who was positively upbeat about current market conditions and his company’s U.S. experience was Brent Binions, president and CEO of Chartwell Retirement Residences REIT (CSH.UN-T)

“Our experience in the U.S. is ‘mostly positive,”’ Binions said. “Seniors housing is one of the few business that during the (2008-10) downturn in the U.S., rental rates held and Chartwell was able to charge increases. It is a needs-based business.”

Chartwell is focused on expanding and consolidating its building portfolio in three states. It has also taken advantage of the sellers market.

“In the U.S., we have disposed of some assets that didn’t have long-term institutional value,” Binions said.

The Chartwell executive described a significant requirement for new seniors housing in Canada over the next two decades.

“We need 15,000 suites per year in the next five years, increasing to 22,000 over five and then 36,000 per year. And that is if there is no increase in penetration rate.  The penetration rate in Quebec is 18% while it is five per cent in Ontario and in the West.”

“Recently the supply growth was three and a half times the demand growth. The timing wasn’t quite right. There is massive opportunity for development.  It’s coming . . . it’s just not here yet.”