Executives from the founding members of the Canadian REIT industry, the Real Property Association of Canada (REALpac) and the TSX were on hand Monday to open trading on the public stock exchange in celebration of the 20th anniversary of REITs in Canada.

“REALpac is the voice of the real estate industry across Canada and represents over 200 billion dollars of assets across the country,” said Steve Taylor, president and COO of Morguard Investments Ltd. and chair of REALpac.

The organization has 80 corporate members where membership requires a market capitalization in excess of $100 million. 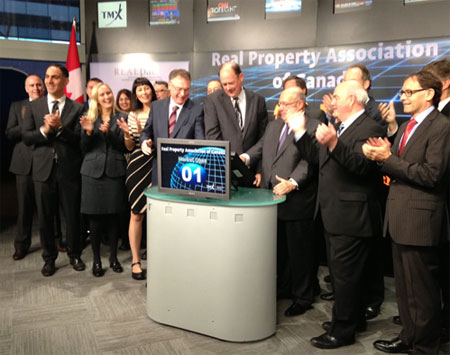 “In 1993, a number of significant events occurred that led to the creation and listing of the first publically traded REITs. Twenty years ago, a group of talented people was grappling with the thorny issue of how to create liquidity in a sector that was caught in the grip of one of the worst recessions in living memory,” Taylor continued.

“Their innovated response was to transform some privately traded mutual funds into a securitized real estate trust that could be traded on the Toronto Stock Exchange.”

Edward Sonshine, the CEO of RioCan REIT – Canada’s largest and most established REIT – and Stephen Johnson, president and CEO of Canadian REIT (CREIT), were both in attendance at the event.

“Realfund, RioCan and CREIT set the stage for the creation and growth of the Canadian REIT industry,” Taylor said.

“With a market of $70 billion, the REIT sector has flourished. It is a mainstream asset class now and most investors hold a major position in their investment portfolios and they (REITs) have outperformed the broader index over the last five years.” 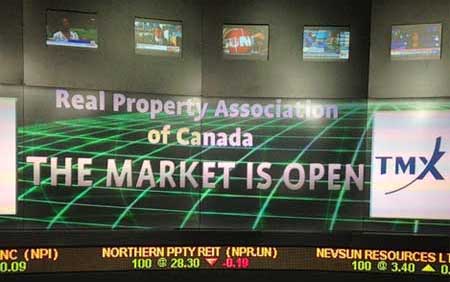 REITS are a part of the larger commercial real estate industry that was recently quantified in a REALpac-NAIOP study The Contribution of the Commercial Real Estate Sector to the Canadian Economy.  The study determined that the Canadian CRE sector’s supports 340,000 jobs across the country, generates $18.1 billion in personal income and contributes $7.2 billion in personal and corporate income tax revenues. (Figures for the study come from 2011 economic data).

The ‘ringing of the opening bell’ at the TSX was held at the broadcast centre in the TSX Exchange Tower in Toronto where about 30 REIT Executives, the TSX staff and representatives of REALpac gathered.

At the designated time, the group stood around a podium and clapped a 15-second countdown to the opening of the market. Sonshine, flanked by Johnson and Taylor,  opened the market by touching a computer screen when a siren (not a bell) went off.