A maturing REIT sector, urbanization and globalization are a few of the topics discussed by four REIT chiefs and a couple of lawyers in Toronto today. 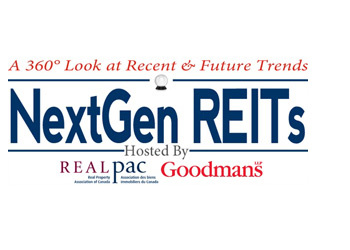 Following are the highlights from the NextGen REIT event, co-sponsored by REALpac and Goodmans LLP:

Canadian investors used to be all about yield when it came to real estate trusts, observed Michael Emory, president and CEO of Allied Properties REIT (AP.UN-T).

That has changed over time as foreign investors have started to take an interest in the Canadian REIT sector. “What has happened really in the last four or five years is the unit-holder base has gone global and that has definitely impacted how Allied and other Canadian REITs build their businesses,” Emory said.

The “global” model that investors want to see and domestic REITs are adopting (at least if they want foreign investment) is “low-debt, low-payout ratios, a very strong platform, preferably anchored by internal management, the ability to grow cash flow per unit and the ability to grow NAV per unit,” he said. “Whereas once FFO per unit growth, distribution growth (was king), today investors are focused as intently or perhaps more intently on your ability to drive NAV per-unit growth.

“They are really focused on a total-return model. It is really shaping the industry very significantly and I think in a very good way.”

Emory added that when his company last month announced a small distribution increase he received a number of emails from U.S. institutional investors complimenting Allied board for “having exercised prudence.”

Blair Welch, a partner with Slate Asset Management, which controls two REITs, said that perhaps Canadians have been too focused on yield while U.S. and international investors are focused on total return.

Stephen Pincus, a partner of Goodmans LLP, noted the REIT sector hit its stride in the 1990s and has generated superstar returns.

Since 1998, the Toronto Exchange delivered a return of about 170 per cent while U.S. REITs produced a 260% over that span. By comparison, Canadian REITs generated a 476% return, the lawyer added.

Canadian REITs had a tough year in 2014, but stormed out of the gates in 2009 following the financial crisis and today are poised to enter a maturing, middle age, he noted.

“We have seen a divergence in the source of capital, one of the big trends in 2014 was the unsecured debt market for REITs,” he said.

Pincus noted the Canadian REIT universe today comprises about 100 trusts with roughly two-thirds of those on the big Toronto exchange and the rest being smaller outfits on the venture exchange. He expects some big fish to swallow up some smaller prey in 2015, following and active M&A year in ’14.

“One would think there is probably some opportunity for some consolidation,” he concluded.

Another theme Pincus identified is the trend of Canadian REITs going across the border or overseas to do some asset shopping.

Two of the four REIT participants today are well beyond dipping their toes into foreign jurisdictions. Beyond Slate, NorthWest International Healthcare Properties (MOB.UN-X) has made hefty investments in Germany, Brazil and Australia and is looking for more.

Paul Dalla Lana, NorthWest REIT CEO and chairman, said the reason for international expansion is simple: there’s too little to buy in Canada as much of what he wants is in government hands.

That led his REIT to target privately owned hospitals in three very different and geographically separated countries that also happen to be “three of the top five private healthcare markets in the world.” The others are the U.S. and surprisingly, China.

“There are a bunch of great fundamental trends happening in those markets that we like,” he added. “They are probably earlier stage than the Canadian real estate market is” for healthcare real estate.

Intensification is an increasing focus for REITs in trying to squeeze out more from assets, the panelists noted. It’s a major focus for Allied, which is a bit late to intensification as it previously did not have the financial heft to take on the risk that came with building on its properties.

“The biggest risk mitigator in terms of development activity is scale,” said Allied’s Emory. “When Allied had $200 million in assets, it couldn’t afford to develop anything.”

That put it on the sidelines as “other large Canadian REITs like RioCan and CREIT, in very different ways, undertake developments say around ’05, ’06.”

Watching bigger REITs intensify their properties, Allied won approval from unit-holders to allocate up to 15% of its book value into development. “It is a good way to create value because we have no land costs,” he said.

Currently Allied is at about six per cent of its book value geared to development, with which Emory is clearly comfortable. “At six per cent, even if we screwed everything up, which won’t happen, it wouldn’t put our distribution capability in jeopardy.”

Choice Properties is sitting on four decades’ worth of real estate that is underdeveloped, generally well-located and has seen plenty of real estate pop up around it. “So we are a little bit late to the game,” Morrison said.

Although the CEOs were generally optimistic – gloomy real estate execs are almost by definition rare – NorthWest’s Paul Dalla Lana said the REIT sector may have reached a flat spot that will take some big money investors to lift it out of. “For me, I think the industry might be at a bit of a plateau other than some organic growth,” he said.

For that to change, REITs have to be less of a retail investor play, he added. “We don’t see pension funds or institutional money managers investing in the space broadly,” unlike the U.S. market.