REITs getting in on the development boom

There is a property development boom going on right across Canada and some REITs are both getting in on the action and planning new construction projects.

Despite the downside potential of development, traditionally risk-averse, yield-oriented REITs as diverse as Allied Property REIT, Crombie REIT and Melcor REIT have building projects either in the ground or on the drawing board.

“Development makes some people anxious and so it should because it is the risky part of our business,” Paul Morassutti, CBRE Ltd.’s senior managing director of valuation and advisory, said while moderating a panel at last week’s RealREIT conference in Toronto.

Allied Property REIT owns 134 office properties, most of which are located on the fringe of 10 cities’ central business districts.  As urban policies of “building up not out” take hold across the country, the proximity of these buildings to downtowns  “makes our projects more valuable and ripe for intensification,” said  Tom Burns, Allied executive vice-president and COO. 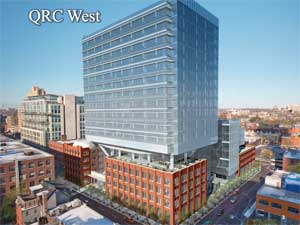 Allied has started construction on QRC West in Toronto, a project with an extraordinary design (shown in picture).  It has an 11-storey newly constructed modern office building supported on concrete legs towering over and beyond the floor plate of an existing five-storey brick-and-beam building.  QRC West has a total of 299,000 square feet of office space with 13,800 square feet of retail.

Another Allied project is the massive York Street Plaza incorporating a million square feet of office space that will span the area above the Skywalk that crosses the railway tracks in downtown Toronto. It has considerable momentum, thanks to redevelopment activities at nearby Union Station and the REIT expects to start leasing activity in October, according to Burns.

In Calgary, Allied owns a small building across from The Bow and is partnering with Westbank and Telus to redevelop the property. Telus has made a commitment to lease the lower floors of  Telus Sky, and a large portion of the remaining 59-storey tower is to be rental residential.

Allied has a list of six development and five intensification projects on its website, including those mentioned here.

However, Burns described Allied as a “super-conservative REIT that is taking one step at a time and proceeding very carefully.”  He said the REIT is going through the planning process for various properties where there are no immediate plans to proceed.

Development a small part of being a REIT

Real estate analysts serving on the panel at RealREIT expressed caution about REIT involvement in development.

REITs in Canada have on average two per cent of their assets assigned to development and the more active REITs have up to eight per cent, said Mario Saric, the director of real estate & REITs for Scotiabank.

“When a REIT’s development activity is one per cent of its assets, we are comfortable. However, when it reaches 10%, 20% and 30% we start to get concerned,” said Anish Chopra, the managing director & portfolio manager at TD Asset Management Inc.

Chopra cautioned that sub-prime mortgages are an example of how “‘something taken too far” can go wrong, suggesting the current development boom may have unforeseen risks.

“Maybe it makes sense to have pure-play REITs and developer REITs (as a way to provide investors with a choice),” said Chopra. For  more risk-averse investors and investment vehicles, REITs involved in development may not be suitable, he added.

Crombie REIT was created from Sobeys‘ real estate holdings in 2006.  At RealREIT, Glenn Hynes, Crombie REIT’s CFO & secretary, described it as a tenant-driven and low-risk developer.

Following its IPO, Crombie had 44 properties and 7.2 million square feet in total. Through acquisition, the company has grown to 180 properties and this year Crombie is acquiring 68 Canada Safeway grocery stores, 15 of which have development potential. Hynes said  Crombie has always known there would have a significant development pipeline in the grocery business.

Since its IPO, Crombie has undertaken  redevelopment of existing assets in collaboration with Sobeys.  Today the REIT is moving to a higher-risk type of development, though “nothing like Allied,”’ Hynes said. It is currently investing $16.5 million in an office development in Moncton,  an expenditure it wouldn’t have previously considered.

“Crombie REIT currently involves one per cent of its assets on development and intends to raise this level to five per cent,” said  Hynes.

“Most of our development is different than Allied Property REIT because it is usually with a lease in hand.”

By comparison, Allied’s QRC West is expected to generate a yield of better than eight per cent, according to Burns. 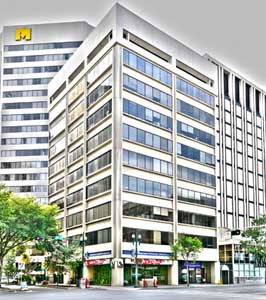 REITs don’t have a lot of cash available because they provide distributions to their unit-holders, Hynes said in explaining REITs’ limited ability to engage in new developments.  They are also public issuers, a process that requires extensive public reporting to raise money and pursue activities.

“REITs have done an amazing job of establishing a good reputation,” said Hynes.  “We can’t let development cause a mishap.  I wonder about the next black swan event and one of them could be getting into development too fast.”

“All the fundamentals are the same between development and acquisition except that developing has more uncertainty,” said Andrew Melton, the chair of the board at Melcor REIT.

Melcor REIT is 50 per cent owned by Melcor Developments, which is now celebrating its 90th birthday and has a “pretty extensive development program,’’ Melton said.

During Melton’s IPO process earlier this year, prospective investors expressed plenty of interest in the REIT’s development potential, a surprise to Melton considering REITs are considered an income security.

Melcor’s development strategy is to transfer properties into the REIT only when they are completed and at least 90 per cent occupied, a low-risk approach.