Rental housing's huge yet little-known contribution to the Ontario economy

Renting pays – particularly for the government. A new report indicates Ontario’s rental housing industry contributes a stunning $7 billion in annual tax revenues to all levels of government. The amount of tax the industry pays exceeds that of the agriculture and food, arts and culture, mining and aerospace industries combined.

The data comes from “Bringing it Home”, a new Federation of Rental-housing Providers of Ontario (FRPO) report. 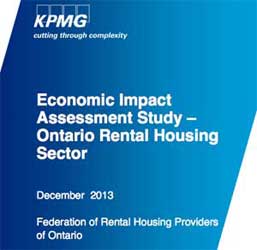 The report is based on research KPMG Canada completed in December using data from Statistics Canada. The report covers the economic contribution of apartment construction, renovation and operations to Ontario’s economy.

Overall, the industry contributed $18.3 billion to the province’s gross domestic product in 2012, while supporting 147,000 full-time jobs.

The report also indicated that rental housing infrastructure cost more than $4.5 billion in 2012, more than the annual provincial capital budget for hospitals, highways or public transit.

The ministry noted that the increase was the second lowest cap since the introduction of rent regulation 38 years ago. The average rent increase guideline from 2004 to 2013 was 2.1 per cent.

The ministry said that providing Ontarians with affordable housing is part of the government’s plan to create a fair and prosperous society and help people in their everyday lives.

The FRPO also announced that after an executive search it has named Scott Andison as its new president and CEO. Andison’s previous position was as national practice leader for property tax with Cushman & Wakefield.

Andison has also previously held the position of chief of staff to the Ontario Finance and Education Ministers and served in senior director and CEO positions with provincial and national industry associations.

“The association has a solid reputation in the industry and I am excited to be given the opportunity to advance the work managed so well under the previous leadership,” Andison said in a statement.

The FRPO is the largest association in Ontario representing individuals who own, manage, build and finance residential rental properties. FRPO’s membership includes more than 2,200 members in every area of Ontario, who own or manage more than 350,000 rental homes.