Members of the commercial real estate industry unlocked their potential last month at BOMEX 2014, the national conference of the Building Owners and Managers Association (BOMA). Hosted by BOMA Manitoba in Winnipeg, BOMEX 2014 welcomed nearly 250 delegatesfrom across Canada, as well as many extra attendees at key conference functions. 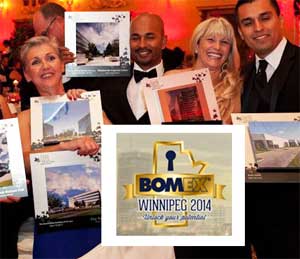 BOMI, the independent institute for property and facility management education, was also represented by Jeffrey Horn, president and CEO of BOMI International and Jim Preece, president of BOMI Canada.

BOMEX 2014 kicked off with the BOMEX Golf Classic presented by Compass Group, held at the Pine Ridge Golf Course and an alternative excursion to Winnipeg’s Assiniboine Park for a tour of its “Journey to Churchill” exhibition. Golf enthusiasts enjoyed the day and zoo goers were delighted to see the polar bears up close and active.

Delegates gathered that evening for a reception at Manitoba Hydro Place to officially kick off the conference.

This year’s exhibition, paired with the Manitoba Building Expo presented by Shaw Business, featured more than 170 exhibitors and showcased the latest products and technologies for commercial and institutional buildings.

Delegates and guests were treated to their own private concert with Rock ‘n’ Roll superstar Randy Bachman during “A Night in Manitoba”.  Food stations and live music from the Justin Lacroix Band set the stage for the legendary rocker whose energy had the RBC Convention Centre visitors singing and dancing the night away.

In accepting the evening’s most prestigious Chairman’s Award, Keith Major of Bentall Kennedy (Canada) LP encouraged all members of BOMA to capitalize on the benefits membership brings.

The association also took time to acknowledge the upcoming retirement of Bill Partridge, chief staff officer (CSO) of BOMA Calgary and the driving force behind many major industry initiatives over the past 34 years, for his dedication and service to BOMA.

BOMEX 2014’s charitable partner Habitat for Humanity Manitoba was the beneficiary of more than $6,000 raised throughout the conference and exhibition.

BOMA Canada looks forward to greeting delegates next year in Quebec City, Sept. 15-18 to celebrate the 25th Anniversary of BOMEX.