Réseau Sélection, which has quickly become the largest private sector owner, operator, developer and buyer of retirement communities in Quebec, recently acquired another three properties in the Greater Montreal Area. 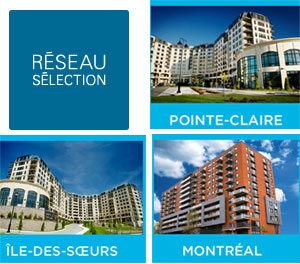 But the real news regarding the Montreal-based seniors housing provider are its ambitious plans for the future: a five-year strategy to invest $2 billion in the construction of 30 new residential complexes, more than doubling its total number of units to 18,000.

“The music won’t stop in Quebec; really we want to go across Canada and we will either acquire or develop,” said Marc Doré, chief investment officer at Réseau Sélection.

Most of that budgeted capital is for development, not acquisition, so the company could grow even faster if deals arise. “This $2 billion will primarily be for development.”

It will be in keeping with its current pace of construction at about 2,000 units per year.

Plenty of room for growth

Given the fragmentation of the retirement housing market, Réseau Sélection believes it has a plenty of opportunities to add to its portfolio by buying as well as building.

“Still, you have five guys in the market who control about 20 per cent of the market,” said Doré. “That is why you are seeing all that new money coming from abroad . . . for example, all the U.S. REITs acquiring in Canada. You see a lot of foreign capital getting into the country for that product.”

Most contenders in the seniors market are all looking for the same thing: size and scale to produce better profits over the long term.

“Economy of scale is very important to the profitability of the owner and the shareholder,” said Doré. “Secondly, you can provide a much more complete service offer to your resident.

“We are also a regulated industry. So one of the things that is always asked by the provincial government before you build is ‘Do you have the experience?’ So the larger you are the more credible you are with the government authorities.”

Part of the attraction of the seniors housing market are strong fundamentals driven by demographics. Aging boomers are expected to boost future demand for the near and long term.

The company’s president, founder (and controlling shareholder) Réal Bouclin, laid out some of the supporting demographics in a speech earlier this year. While 20 per cent of the world’s population will reach age 60 by 2050, Canada is getting older more quickly.

At the municipal level, Montreal, with 15 per cent of the population now over 65, is aging even more rapidly, with 25 per cent of its population to reach 65 in the next 10 years.

Réseau Sélection this month announced it has acquired three “prestige” properties in the Montreal area, located in the West Island, Nun’s Island and Montreal.

This increases the number of complexes owned and operated by Réseau Sélection to 29, a tally that includes three projects under construction in Rosemont, Châteauguay and Vanier.

Following the latest acquisition of 820 units, the total number of units for the company is at 7,400 (a 16 per cent increase in the company’s operating portfolio) and gives it size and scale in the Montreal and Quebec City markets.

What sets the Quebec-based seniors housing provider apart is its focus on health and allowing its residents to “Live better, longer” according to its slogan.

“In the 25 years since Réseau Sélection was founded, our priority has always been to offer retirees an enjoyable and stimulating environment in exceptional residential locations,” said Bouclin. “Our comprehensive service offer is designed to make retirement as fulfilling as possible.”

It is a point of difference echoed by Doré.

“We are approaching this industry with prevention, rather than care as a large differentiator. Instead of telling you we are going to take care of you, we are going to prevent things from happening to you.”