The Shops at Westwood Square in Mississauga, Ont., has undergone major renovations and is preparing to show off its new retail condominium units that were retrofitted into a long-empty, two-storey Zellers store. 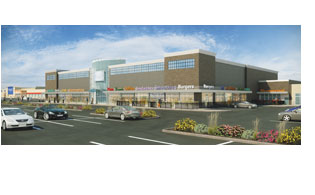 Fieldgate Commercial purchased The Shops at Westwood Square with Plazacorp from a private owner four years ago, and they’ve created what they claim is the “largest South Asian indoor mall in Canada.”

While both companies focus on developing shopping centres, the 40-year-old property is unique in that it features retail condo units sitting between traditional leasehold retail outlets that include Dollarama, FreshCo, LCBO, Shoppers Drug Mart, The Source and branches of four of the country’s five major chartered banks.

The first phase of revamping the site was to add a new Walmart, and this second phase introduces 264 units in the former Zellers location where individual owners establish a condo corporation and pay a management fee to cover the maintenance of the property’s building and common areas.

The Shops at Westwood Square’s renovation and expansion were designed by award-winning Kohn Partnership Architects, and the two-level condo section is meant to be elegant and functional. Updated mechanical systems are hidden behind what West called a “crisp and clean look” where the retail venues surround a large circular walkway and a series of pathways runs off the central circle.

The $15-million cost of the renovations included a new façade, landscaping and work on some accesses and in the parking lot.

The mall now has about 425,000 square feet of space, with approximately 20 per cent of that taken up by retail condo units that come in three different types: straight retail; ground-floor food outlets with access to the outside; and second-floor food court spaces.

“There’s a wide range of pricing based on unit sizes and types,” said West. “Some purchasers have bought two units and combined them.”

HomeLife Maple Leaf Realty Ltd. is the broker and has sold almost all of the retail condo units after a brisk initial selling period two years ago. Purchasers paid from $850 to $1,100 per square foot for units ranging in size from 55 square feet to about 550 square feet. Kiosk units of about 100 square feet are also available.

The mall is holding a “Taste of Westwood Square” event for consumers to sample selections from the food court while visiting the new addition on Saturday from noon to 4 p.m., but the promotion is also being used to push the sale of the final food court units to new and existing purchasers.

“There’s a renewed excitement about the project, so we’re running this ‘Taste of Westwood Square’ to bring everybody back to remember what they invested in and basically see the finished product and push the remaining sales over the goal-line so that we can completely sell out,” said West.

In a multicultural area

The mall is situated on Goreway Drive — two blocks north of Derry Road and not too far from the nexus of Highways 407, 427 and 401 — in a multicultural area with a large South Asian population within a short drive. West said 80 to 90 per cent of the people who’ve bought retail condo units are of South Asian heritage, and that will be reflected in the products many of them sell as well as the fare served in the food court.

The Shops at Westwood Square already has leasehold tenants that cater to the South Asian community with specialty grocery items, clothing and fast food.

The Shops at Westwood Square has traditionally been a community mall, but there’s hope these new changes can make it an attraction like Pacific Mall in Markham, Ont., the largest Chinese indoor mall in North America with more than 300 mostly independent Chinese retailers.

“This is unique so we hope our trade area will increase and bring in consumers from all over the GTA,” said West.