The growing importance of urban retail and outlet centres, the perils faced by secondary malls, the effect of fashion department stores entering Canada and the impact of e-commerce strategies were among the topics spotlighted at a retail panel at the Toronto Real Estate Forum on Dec. 4. 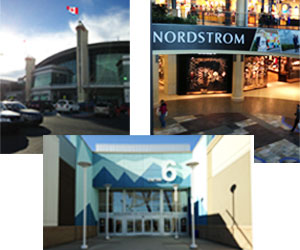 The session at the Metro Toronto Convention Centre was moderated by Mike Pelyk, a former Toronto Maple Leafs defenceman who went on to a career as a retail advisor with senior positions at Triovest, Oberfeld Snowcap, Oxford Properties Group and Loblaws.

SmartCentres, Canada’s largest developer and operator of unenclosed shopping centres with more than 250 properties, has traditionally located in suburban and smaller markets. But it’s shifting its focus as it’s seeing the most growth potential in Canada’s six largest cities. It’s introducing power centres with dominant retailers to an urban format and is heavily involved with the development of the Vaughan Metropolitan Centre, including putting a two-level retail podium in the 365,000-square-foot KPMG Tower.

Smart Centres has also just launched its first three Penguin Pick-Up locations, where consumers can order a product online from almost any retailer, choose a convenient Penguin Pick-Up location as the shipping address and then pick it up for free without leaving their car between 7 a.m. and 11 p.m. More outlets will be rolled out and Pambianchi believes the service will draw traffic to SmartCentres malls and other non-affiliated locations it may open.

Oxford is focused on expanding, renovating and redeveloping its key super regional retail properties — including Toronto’s Yorkdale Shopping Centre, Square One Shopping Centre and Scarborough Town Centre, as well as Calgary’s Southcentre Mall — while investing in urban retail locations, where Jones believes there are “fantastic opportunities.”

Fellow American fashion department store chain Saks Fifth Avenue will open across the street from the Eaton Centre in the fall of 2015 after Cadillac Fairview purchased the property on Queen between Yonge and Bay streets for $650 million from Hudson’s Bay Co. It will lease 600,000 square feet of space back to the Bay while also making the location home to Canada’s first Saks. In the spring of 2016, another Saks will go into a Sears store being vacated at Sherway Gardens.

Lemm said the introduction of these luxury merchants should drive up market share for their respective locations and could have long-term effects on their retail mix.

While these super regional shopping centres are thriving, and introducing better and more varied food and entertainment options to enhance the consumer experience, it’s at the expense of surrounding secondary malls that may not have paid enough attention to planning and merchandising.

“Those centres will have struggles and it may end up being that they find that retail isn’t the best use for those properties,” said Halpin-Tarrant.

Lemm said some Canadian retailers that have supported these malls are having difficulties and could trim their portfolios, which could present further challenges. She added that “there are a lot of malls that are in serious trouble” and should be redeveloped since many of them occupy valuable real estate.

Outlet centres that have opened in Canada over the past couple of years have enjoyed great success, and more are on the way. The panelists said there were differing views among retailers on how close they want their outlet stores located to their full-line shops.

Jones said that Nordstrom has a 25 per cent customer crossover rate between its brands and that the best sales come from stores where there are full-line and outlet locations in relatively close proximity. Pambianchi, meanwhile, said it strategically located its outlet centres in Halton Hills northwest of Toronto and in Mirabel northwest of Montreal far enough away from chains’ full-line stores to avoid eating into their profits.

In locations where Oxford has enclosed super regional malls with plenty of available property, Jones said the company is considering introducing an outlet element to try to head off competitors from building new outlet centres nearby and reducing their market share.

Halpin-Tarrant stressed it’s important for most retailers to establish at least some e-commerce presence, and those that are more aggressive with the strategy may consider reducing their retail footprint. In some cases, it may come down to comparing the costs of shipping product to customers versus leasing space to showcase it, as companies try to measure how they can get the most bang for their buck.

While rents and taxes are generally higher in Canada than in the United States, Lemm said Canadian stores have higher sales per square foot than those in the U.S., which she sees as being “more over-retailed.” This could create more opportunities in the Canadian market, and Jones is looking to European and Asian retailers to expand into the country to try to spike the sluggish growth they’re encountering at home.

“We’ve been lucky because we’ve been able to attract a lot of great U.S. retail brands that have performed fabulously well,” he said. “But that pool is slowing down and we’re not getting as many new brands coming to us, so we have to look further afield to Europe and other parts of the world.”