It made national headlines when the average price of a freehold detached home in Toronto surpassed $1 million in February, though house prices have been even higher in Richmond Hill for the last six months. 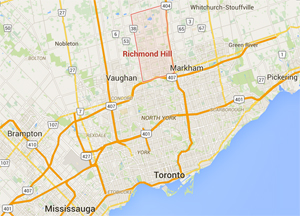 According to Multiple Listing Service, the average price of a detached home in Richmond Hill reached $1,092,964 in February and has increased each month since, hitting $1,178,008 in July. Toronto broke the million-dollar barrier at $1,027,244 in February and its prices have been up and down since, with July’s figure sitting at $994,367.

“Richmond Hill is peaking over other communities because it’s centrally located around Yonge Street,” ZivKovic said of the 56-kilometre artery connecting the shores of Lake Ontario and Lake Simcoe.

“In today’s economy, you don’t know where your job is going to take you, so in Richmond Hill you’re equidistant to every job around there and you have easy access to the 407, the 404 and GO Transit. It’s a safe bet.”

Richmond Hill, a town of about 200,000, benefits from new developments because it has more available land to build on. Vaughan to the west and Markham to the east have also experienced increased construction of new detached houses, which has helped push their average price above $1 million this year.

Some of ZivKovic’s clients are now looking farther north in York Region to the towns of Aurora and Newmarket, where prices are rising, but still haven’t reached the heights of their nearby communities. The average price of a detached house in Aurora has risen from $759,618 to $928,728 over the past year, while the price in Newmarket has increased from $608,761 to $727,179 during that same period.

Many of the people purchasing houses in Aurora and Newmarket, according to ZivKovic, can be slotted into two groups: those who can make a tidy profit by selling in Toronto or southern York Region; and first-time buyers who have been priced out of those markets.

ZivKovic said people who work in Toronto and southern York Region and want to upsize from a condominium or buy their first house have the choice of a move north to Aurora and Newmarket — or the less expensive housing markets of Mississauga and Brampton to the west and Ajax, Pickering and Oshawa to the east.

“(The question is) do you want to spend more time in your car or more money on your house?”