In what appears to be a win for both companies, RioCan Real Estate Investment Trust (REI.UN-T ) has acquired Trinity Development Group’s interest in three retail centres currently under development. 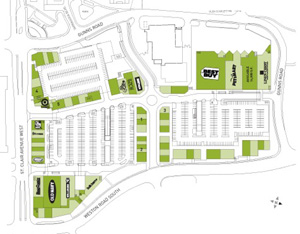 RioCan and Trinity were developing the three projects as partners however the sale sees the Toronto real estate giant, Riocan REIT assume full control including the roles of development manager and landlord.

East Hills and McCall Landing were acquired free and clear of financing while RioCan assumed Trinity’s share of the in-place, third-party financing of $24 million outstanding on The Stockyards.

The $105 million cash infusion Trinity received in return for its interest in the retail centres allows it to pay down its mezzanine debt.

Edward Sonshine, RioCan’s CEO, said in a statement the staggered nature of the developments made them attractive as a purchase.

Located at the intersection of St. Clair Avenue and Weston Road, The Stockyards is a 19-acre site with approximately 551,000 sq. ft. of retail. The project is a two-storey urban centre with the first purpose-built Target in Canada. The Target is already open and the majority of the other tenants will open by mid-2014.

Other tenants in the centre include Marshalls, HomeSense, Michaels, Old Navy, Sport Chek and PetSmart. The Canadian Pension Plan Investment Board (CPPIB) own a 50 per cent interest in the property which it acquired in June 2008.

East Hills is a 145-acre site currently being developed into a 1.1 million-sq.-ft. regional retail centre planned over three phases. A 134,000-sq.-ft. Walmart scheduled to open in the second quarter of 2014 will anchor the site.

RioCan’s purchase gave them 40 per cent ownership of the property. The remaining owners are the CPPIB with 37.5 per cent, Lansdowne (12.5 per cent) and TriStar (10 per cent).

McCall Landing in Calgary’s northeast, a 109-acre development, will have approximately 862,000 sq. ft. of retail.  The CPPIB bought a 50 per cent interest in the property in June 2008.

A RioCan media release said the purchases increase the company’s portfolio concentration in Canada’s six major markets, an ongoing objective of the REIT.

“Trinity has been an influential partner and major contributor in the growth of RioCan over the past 20 years and we look forward to continuing to work with (Trinity president) John Ruddy and his team on many future development projects,” Sonshine said.

Founded in 1992, Toronto-based Trinity has developed more than 22 million square feet of retail space across Canada.

The Motley Fool recently identified RioCan REIT as one of three “dividend stocks for the next 100 years”.  More than 85% of the company’s revenue comes from high quality national and anchor tenants.