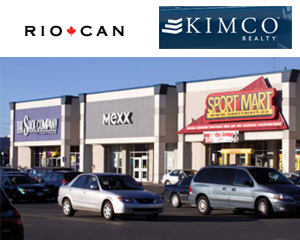 The deal breaks down as RioCan (REI.UN-T) seizing on the opportunity to buy a big block of assets while U.S.-based Kimco (KIM-N) is likely looking at current highs as a good point to exit Canada.

“It is an exceptionally rare opportunity to acquire a selection of properties from a portfolio of this scale that can be easily absorbed by the Trust,” RioCan CEO Edward Sonshine said in a statement. “This acquisition improves RioCan’s Canadian portfolio by increasing the concentration of the trust’s portfolio located in Canada’s six largest markets, most notably in the Greater Toronto Area.”

Kimco CEO Dave Henry characterized the Canadian exit as a continuing process of the company “simplifying its operations by reducing the number of properties in joint ventures, including those that we do not manage, and provides an important source of capital to fund redevelopment activities and further strengthen our balance sheet.”

Rob Sutherland, a real estate analyst with Euro Pacific Canada Inc. in Toronto, expects it was an easy decision for RioCan.

“It is very rare that you can get a portfolio of any size – they already had exposure to it – but getting a highly integrated exposure to a portfolio that size in Canada is always difficult and something that if RioCan is able to do, they would obviously jump at.”

RioCan is acquiring only a portion of the JV portfolio, Sutherland noted.

“They are keeping the right ones: Ontario, British Columbia, Alberta, and getting rid of Halifax, stuff in P.E.I., only keeping the stronger markets.

“I don’t know what the cap rate is or anything else but at that point the cap rate becomes almost immaterial because you have such a large portfolio premium. Just being able to do something that size, it is almost worth whatever you have to spend to do it. You just can’t get a lump-sized transaction that large.”

As for Kimco’s motivations, Sutherland sees it as an astutely timed move.

“There is obviously a pretty strong ‘short Canada’ and this is the top of the market in some ways and a bit frothy. Just a good time to get out.”

Today’s announcement marks the end of a 15-year partnership.

The portfolio has been broken into three groups:
• the first group is a collection of 22 properties selected by RioCan that will be acquired in two stages: 19 properties during the third quarter of 2015 and three properties in the first quarter of 2016;
• the second consists of 10 institutional-quality retail assets which the partners have agreed to market for sale, one of which is currently under a conditional contract to be sold;
• the third group of assets includes three transitional properties that were previously occupied by Target, which will be dealt with at a future date.

The soon-to-be former partners also said that in March, RioCan acquired Kimco’s 50 per cent interest in Grand Park and RioCan Leaside Centre in Toronto, as well as Brentwood Village in Calgary.

The joint venture partners also completed the sale of Centres Jacques Cartier on July 31, 2015 at a sale price of $18 million ($9 million at RioCan’s interest).

RioCan will acquire Kimco’s interest in a portfolio of 22 Canadian properties at a purchase price of $715 million and assume Kimco’s share of the existing in place debt, subject to conventional closing conditions, of $231 million, which carries an average interest rate of 4.1% with a weighted average term to maturity of approximately 3.5 years.

The initial closing of RioCan’s acquisition of Kimco’s interest in 19 properties is expected to occur by Sept. 30 (subject to Competition Bureau approval) at a purchase price of $477 million.

RioCan will assume Kimco’s share of the existing in place debt of $127 million, representing a cash commitment of approximately $350 million by RioCan.

RioCan plans to fund its acquisition through a combination of internal resources and credit facilities. The remaining three properties will be acquired at a purchase price of $238 million.

RioCan will assume Kimco’s share of the existing in place debt of $104 million. This phase of the transaction is expected to be completed in January 2016.

RioCan and Kimco will seek to dispose of nine of the remaining thirteen co-owned properties, which total approximately 783,000 square feet, in the first half of 2016. These properties are in the early stages of being marketed and there is no assurance that a sale transaction will be completed.

The remaining three properties will be dealt with at a future date.