Rising rates a concern for REITS, less so for funds

It should come as no surprise to any player in the CRE space: U.S. Federal Reserve tapering and the prospect of higher interest rates hit REITs hard and have pushed pension funds to the forefront as buyers. 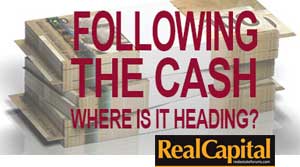 “It is the pension funds who today are really leading the way, they have taken over from the REITs,” said Peter Senst, CBRE Ltd.‘s president of Canadian Capital Markets, who last month in Toronto moderated a RealCapital Forum panel tackling the issue of real estate investment in a rising interest rate environment.

The first issue industry players tackled during the hour-long panel was just how fast and how high rates are going to rise. Opinions of the four panelists ranged from moderate to somewhat apocalyptic.

“At no point in the history of at least my real estate career have people been able to build buildings, borrowing more, at three or four per cent,” Senst said.

That happy state was driven by a “mismatch” between the U.S. and Canada which is ending as growth in the U.S. outpaces slow-growth Canada and will drive up rates. Senst expects rates to be 200 basis points higher five to seven years from now.

Jonathan Gitlin, senior vice-president of Investments with RioCan REIT (REI.UN-T), is in the more dovish camp, calling for a “very smooth” shift in rates. He recalled attending a speech from former Bank of Canada governor Mark Carney who surprised the audience by predicting rates would remain low for two to three years.

Rates remain ultra-low today, even after the Fed tapering scare of last May.

“Interest rates have spiked slightly but certainly not to any great extent,” Gitlin said. “I don’t think there is going to be any significant movement in interest rates there for the next little while anyways.”

His dovish outlook was shared by Paul Zemla, Bentall Kennedy (Canada) LP‘s chief investment officer. He noted there is a relationship between interest rates and cap rates that is “not exact, it is not linear” and the spread has ranged from 175 to 450 basis points, where it was before rates jumped last year.

The long-term average spread over the last 20 years is around 290 basis points – about where we are today. “We have a 2.5% bond and we have roughly 5.5% cap rates” for institutional A-quality property.

A rate increase of 100 basis points is all but guaranteed over the next 18 months, said Blair McCreadie, Standard Life Investments Inc.’s head of Canadian Real Estate.

“In the short term probably we are not going to see any material changes in the marketplace, but there is 100 basis points at least coming within the next 18 months – and we can’t handle another 30% increase in our Canada bond rate – and the borrowing cost is going to have an impact on the market and cap rates are going to be affected by it.”

Rising rates are of highest concern for REITs – “they are almost perfectly correlated to interest rate movement,” said Zemla.

While institutions typically use a lot less leverage than REITs, it can affect dispositions as the trusts are counted on as purchasers for a good chunk of fund asset sales.

Gitlin, speaking from the REIT camp, said that rising rates will adversely impact the weak. “There are some lesser players that will struggle significantly more because their balance sheet isn’t strong enough to absorb any significant spike in cost of capital.”

The golden times may be ending for commercial real estate, but that is not necessarily a bad thing, noted McCreadie. “Real estate has had a fantastic run. Every day for the past 10-plus years, except for some blips along the way, we all looked smarter because the cost of capital was going down and cap rates were going down.”

The favourable conditions have been in place during the lifespan of most REITs, he added.

“But the world has changed. It’s a good thing for Canada. The biggest issue is guys like (Bentall’s Zemla) and I still have lots of capital to deploy in the marketplace. We now have to do asset management and the operation of good solid REITs like RioCan are the ones that are going to prevail.”

“We didn’t take on too much debt,” said Zemla. “It makes us far better positioned to weather the storm, even if we do trail the U.S. for the next few years.”

RioCan’s Gitlin said he believes REIT valuations have been overly hammered by the rise in rates. RioCan today is trading close to its net asset value “which means you are basically buying our individual asset pricing” and getting “our platform for free” and the amalgamation of RioCan’s property portfolio for free.

As well, the spread between RioCan’s yield paid to investors versus 10-year government bonds is currently very wide.

“Fundamentally, business has never been better,” Gitlin said of RioCan. “Business is growing, our tenants are growing and things are quite sound. We focused, as have many of our peers, on bettering our portfolio over the last few years and getting into more high-growth assets where we can bank on NOI growth to justify growth in our value.”

Gitlin noted that RioCan sold $700 million in assets, in part to cull its portfolio, but also to shed low-growth assets in order to purchase higher-growth assets and better position itself for a higher-interest rate environment in the future. It’s a strategy other REITs have also adopted, he said.

“It was a year of two halves. The first half was certainly much more active from an acquisition standpoint but what kept me busy in the second half was dispositions where, as I said before, we really did recycle a tremendous amount of capital quite prudently and I think other REITs did the same.”