Canadian and American pension funds are geographically diversifying their real estate portfolios, according to panelists at a breakfast event hosted by the Real Property Association of Canada and the United States-based Pension Real Estate Association in Toronto last week. 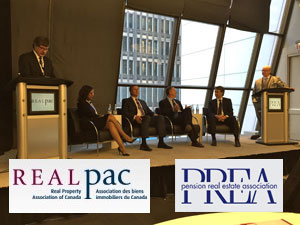 “There’s so much capital chasing quality real estate in the U.S. and Canada that we feel it’s too expensive, so we’ve started to point our capital outside those borders,” said Sharm Powell, director of the Canada Pension Plan Investment Board (CPPIB), which has a $34-billion real estate portfolio in 15 countries and offices in Toronto, Hong Kong, London, New York City, Sao Paulo and Mumbai.

“As we grow into these other markets, one of the things we think about first and foremost is the quality of partner and what type of assets we can access with them.”

Ivanhoé Cambridge global chief investment officer Sylvain Fortier said the real estate subsidiary of the Caisse de dépôt et placement du Québec pension fund has a portfolio worth approximately $45 billion, with about 40 per cent invested in Canada, 32 per cent in the U.S., 15 per cent in Europe, and the rest in Latin America and Asia.

“We very much like U.S. office in big gateway markets, and we like London a lot and Paris a lot. If we have to have vacant buildings, where do we want them? That’s where lenders go back first and that’s where the capital markets went back first in 2010 and 2011, so we like those big markets.

“We started multi-family three years ago and we’re now over 20,000 units, mostly in London, San Francisco, New York and southern California, and some gateway markets like Washington, D.C. and Seattle.”

Fortier said Ivanhoé Cambridge has been rather cautious over the past five years and, as prices have gone up during that time, the company has both purchased and sold about $25 billion in assets. He also emphasized the importance of choosing international partners with their own product pipelines, and he expects Ivanhoé Cambridge to grow in Asia and the U.S.

Powell said returns are lower than what she’d like these days and that CPPIB has sold more than it has bought over the past several months, particularly in Canada.

Kevin Faxon is managing director and head of real estate Americas for J.P. Morgan Asset Management, which is involved in $75 billion worth of real estate around the world. While more than 70 per cent of that is held in the U.S., he talked about investing in Europe and Asia.

“There are many Europes when it comes to investing, so that drives you towards closed-end private equity funds that are mortgage-focused by geography or strategy,” said Faxon. “If you go to Asia, it has been exclusively a closed-end, higher return strategy.”

While the panelists are all advocates of global diversification, they admitted pulling it off can be difficult for investors with limited staff sizes to take part.

“You have to have a very long-term view of it and the ability to execute on it and stay the course, and that’s tough for some smaller organizations,” said Tom Garbutt, managing director and head of global real estate for TIAA-CREF, which has just under $90 billion in assets under management in the U.S., Europe, the Asia-Pacific region and South America.

Garbutt believes real estate is a good choice for companies looking to invest in emerging markets.

“Real estate helps us capture emerging economies, especially when those economies are high-consumption economies. Doing a retail play or a hard asset play could bring some very interesting value that you might not catch in the public market.

“We think by going into real estate through a private market approach, in certain places, does have its benefits. But you have to have the stomach to be in there for the long haul.”

Powell also discussed CPPIB’s first foray into China via a fund investment, which was with a partner that didn’t turn out to be as strong as originally hoped. It made her realize just how important solid partnerships are when entering new countries.

“Now when we go into emerging markets, we look for the biggest, the best and the most liquid, and we try and stick with them.”