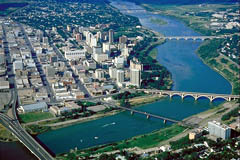 “National companies have clawed back the space that they’re taking and a lot of that space hasn’t been absorbed,” said ICR Commercial Real Estate sales associate Kelly Macsymic. “So a combination of a move to suburban and tightening by larger firms is giving us all these vacancies.”

Rental rates for class-A properties have remained around $32 per square foot and capitalization rates have held firm at 6.5 per cent. However, the available vacancy rate (which combines vacant inventory along with space being marketed for sublease) in Saskatoon’s competitive downtown market has risen from 4.8 per cent in 2013 to six per cent in 2014 to 12.4 per cent so far this year.

The abundance of inventory available in class-B and -C space has caused asking rates to drop slightly to the $12-to-$24-per-square-foot range and landlords have become increasingly willing to offer such incentives as rent-free periods and tenant improvement allowances in order to be competitive and attract tenants.

In the suburbs, new development rental rates have stayed around $23 per square foot while cap rates have remained at 6.9 per cent. But vacancy rates have increased from seven per cent to eight per cent to 14.3 per cent during that same period.

Speculative office building in the suburbs still incomplete at the onset of the slowdown has added to vacancies in the suburbs, whereas no new office construction is taking place downtown and none is seen on the near horizon, according to Macsymic and a second-quarter market report issued by ICR.

“No one’s going in the ground without a tenancy,” she said. “We don’t typically see builders come in and do large speculative building.”

With economic projections for the city expected to be lower than initially forecast, proposed projects including the 250,000-square-foot River Landing and the 177,000-square-foot 375 2nd Avenue South will likely remain on hold.

A softening demand and the introduction of new inventory has led to the vacancy rate for industrial buildings also increasing, but at a slower pace, going from 7.4 per cent in 2013 to six per cent in 2014 to 8.2 per cent so far this year.

No new spec development is expected in this cautious environment, which could bode well for absorption of vacant inventory.

“There’s older warehouse product that’s been set up for a tailored use that’s really hard to turn around and make into something else for other users, so there’s a glut of that on the market,” said Macsymic.

“Users in the market have lots of choice right now so they don’t have to get creative on it. That definitely inflates the industrial vacancy rate.”

Average asking rates ranged from $12 to $12.50 per square foot over the past few years, while this year they’ve decreased slightly to the $11.50 to $12 per square foot range.

“No one’s getting really desperate yet,” Macsymic said of the overall Saskatoon commercial real estate market. “It’s a cycle and things will come back.”