Seasons Retirement Communities looks to double in next five years

In the real estate game, it’s nice to have some long-term trends in your favour. That’s certainly the case for Seasons Retirement Communities and the retirement home business in general. Business is booming, and will continue to do so for the foreseeable future as millions of boomers enter their golden years and many seek a simpler lifestyle. 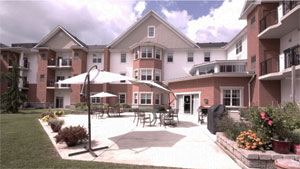 Seasons, a limited partnership majority owned by the Labourers’ International Union of North America (LiUNA), aims to be a bigger player in the space through acquisitions and organic growth.

This month it announced its latest addition, the acquisition of the Clarington Centre from Kingsway Arms Retirement Residences Inc. for a purchase price of $27.345 million, giving it nine retirement communities across Ontario with number 10 now under construction in Milton.

The Clarington Centre in Bowmanville fits nicely in Seasons’ portfolio. It is located close to the city’s downtown and offers a range of service choices for residents from independent living, assisted living and memory care services.

Seasons does not aim to be right in the downtown of the communities it services but close enough to shopping, entertainment and medical facilities that its residents are just a short distance away from most everything.

One of the most appealing aspects of the retirement real estate game, aside from its stability, is the fact that it still remains an industry dominated by small-scale operators. “The retirement home industry is quite fragmented,” said Russell Hopper, Seasons’ chief financial officer.

Chartwell Retirement Residences, which owns and operates 180 locations across Canada and the U.S. Chartwell and Revera Inc. (202 residences in Canada and 40 in the U.S.) are the biggest players in the business but are hardly dominant, said the Seasons’ executive.

“Chartwell and Revera, between the two of them, I believe are only 20% of the market,” he said.

Seasons’ growth plan will be a mix of consolidation and growth, said Hopper. “The idea will be to both develop and to acquire on a well-planned, rationale, well thought out basis. A lot of consolidators in various industries, not necessarily this one, will be just sort of throwing money at the wall because they want to grow. We have a very clear vision that we will acquire and or develop when it is accretive to our owners’ value.”

The Seasons CFO said he expects that growth to be a 40-60 acquisitions to development mix going forward. “But that really depends, if a good acquisition comes up, it could be 100% and zero.”

Seasons’ double in five years growth plan will make Ontario its geographic focus, he said. “I think Ontario will always be sort of the central part of the business but we will be looking at opportunities across Canada.”

Hopper narrowed that focus further, ticking off the high-growth western provinces of B.C., Alberta and Saskatchewan “and potentially Quebec depending on the opportunity.”

It may sound strange for a retirement community operator, but the service model that Seasons has adopted is based upon one created by a company best known for appealing to children, namely that of the Walt Disney Company. All of the company’s senior managers have gone through the Disney Institute. “The idea is to really provide a unique experience for the residence,” he said.

Cutting to the heart of its competitive strategy, Seasons does not expect that it can stand out on the strength of its properties along. “The portfolio is young, the average age is probably four to five years. They are new, they are modern, light and airy, well equipped. But you look at similar aged properties provided by Chartwell or Revera, they are going to be similar. Good players are going to produce good properties.
That leaves service as the main differentiator. “That focus on the resident’s experience is I think really what would set the Seasons properties apart.”

Disney-fiction of retirement homes “is just philosophy, it is just a focus on customer service,” he added.

The Seasons executive does add one caveat: it aims to provide best-in-class food for its residents. “That’s not the sales pitch. I make sure that when I visit a home, it is right around meal time because it is really good. On a purely selfish level, I always make sure that I am there for lunch.”

“It represents a stable investment platform for them that provides reasonable returns in an industry that they are comfortable with.”

Operators like Seasons and Chartwell are targeting the new generation of boomer retirees who do not want to live in the institution-style, old folks homes of yesteryear. Instead, they are looking to offer a range of options for so-called “private pay” retirees who have the financial means to afford an upscale retirement.

Richer and more numerous elderly are going to push that change going forward. By 2025, Statistics Canada forecasts that Canadians over the age of 75 will make up more than 9.1% of the population from 6.7% today.

Last year, RBC Dominion Securities Inc. predicted “potential nationwide demand for an additional 4,000 to 5,000 private-pay suites annually for the next 15 years.” RBC said wealthy boomers are “likely to be demanding in terms of their desire for hotel or resort-like settings and higher levels of service.”