If you could use just one word to describe Shindico Realty Inc., it would likely be patient. 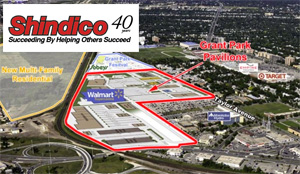 The Winnipeg-based real estate company, which recently celebrated its 40th anniversary, got its start when company president and CEO Sandy Shindleman discovered real estate was his true passion, rather than the farming and food-related businesses he was engaged in at the time. Not long after, his brother Robert joined the company and remains at his side today as executive vice-president and chief operating officer.

Over the decades, Shindico assembled expertise in most of the aspects of commercial real estate: from brokerage and tenant representation, to development and asset and property management. Its management portfolio covers all asset classes: mixed-use, retail, multi-residential, office, industrial, agricultural, and storage.

Patience in the Park

Grant Park already has some retail up and running: namely a Walmart Supercentre. Next on the docket is the construction of “higher-quality” residential apartments and as many as three 80,000-square-foot office buildings close to the central business district.

Constructing office space “is something that you just don’t speculate on in Winnipeg, the office business requires a substantial lease up before you go ahead,” said Sandy Shindleman.

It all sounds great, but it was a long time coming for the Shindlemans, who have had their share of run-ins and disputes with the city’s bureaucracy over various projects.

It took the company nearly 25 years to assemble the estimated 20 separate parcels of land on which the Grand Park Pavilions sits.

“It turned out that we have an infill site that is 50 acres,” said Shindleman. “Even for a city the size of Winnipeg, it’s amazing because we have demonstrable demographic and customer base that surrounds it on all four sides.”

Assembling the land for the site was a quest that included “working through numerous administrations and finally being able to afford the huge development costs that were never anticipated. The city quite took advantage of the situation and had this property pay for a lot of things and when we finally had the equity to do that, we did it,” Shindleman added.

According to the Shindico website, construction and infrastructure costs have tripled over the time it took to assemble the land for the site and gain necessary approvals. On the bright side, development grew up around it over that span and it is now “surrounded by the Royal Bank, Manitoba Hydro, and Pembina Highway.”

The website touts Grant Park Pavilions, which is located southwest of the CBD, as a transformational development for the city, the creation of a neighbourhood near the downtown on mostly vacant land “that will be serviced by all modes of transportation – transit, an efficient roadway system (both regional and local), and active transportation.”

The company is also working on another million-sq.-ft. sized mixed-use development in the city’s west end with a slightly different look: “Not as orientated to office as much or residential although we are hopeful to see hotels on that site and some multi-residential as well,” explained Shindleman.

Shindico has developed two self-storage facilities over the past decade and is looking to build a third.

The company also has a joint venture with Cadillac Fairview adjacent to the Polo Park Shopping Centre that was the home of a Target store and is now available for lease. The ex-site of Winnipeg Stadium is also slated to host “a couple of hundred thousand feet of office and retail.”

Shindico employs more than 80 and has about $1 billion in assets under management with another $1 billion in projects in the pipeline.

The company is growing beyond Manitoba’s borders as well with assets in Ontario (Sault Ste. Marie, Thunder Bay), Saskatchewan, and the U.S. and possibly Alberta and Europe.

“We have a lot of smaller market projects from Regina, Yorkton (Sask.), Brandon (Man.), Portage la Prairie again, another phase is Selkirk (Man.), another phase in Winkler (Man.). We did complete a project in Sault Ste. Marie which we now have fully leased and one in Thunder Bay,” said Shindleman.

“We are looking in Alberta to see if there might be some opportunities. We have invested in Arizona in the past with three large assets, one of which was sold.”