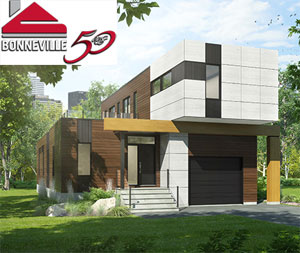 The future of multi-family purpose-built rental apartment construction comes with some assembly required.

In modular building construction, houses, apartments and even office towers are factory-built in sections and trucked to a site for assembly. At the site, workers need only to clear the land and lay down a foundation before the sections are trucked in. Once all the sections have been put together, the finishing touches are added, and the building is ready for occupancy.

Modular construction technology has advanced considerably over the past decade thanks to the efforts of companies like Bonneville, who have elevated modular building design to an art.

Fact: Modular building construction builds buildings in sections within climate-controlled factories. All of the building that takes place in the factory meets every building code requirement. This means every building has the same structural support, electrical safety systems, plumbing, and more, as a traditionally built apartment building.

In fact, in the factory modular builders are able to build each building’s components from the inside out and the outside in. After the studs go up, one set of workers puts up the internal drywall, while electricians wire the building on the outside. The insulation and outer shell is then put into place.

Modular building design is well-versed in putting these buildings together and making sure they stay together. Don’t forget that these buildings are sufficiently constructed to withstand the rigours of transport. What results is not a pile of Lego blocks, but a sturdy, well-built building that can withstand the elements as well, or better, than any conventionally constructed building.

Fact: Oranges and tomatoes have to be shipped to their destinations as well, but they don’t come out as cubes. Pay a visit to Bonneville’s website at maisonsbonneville.com and look at the designs they have on offer. You would be amazed at what they can build after trucking components along highways to get to the construction site. Buildings have huge windows, balconies, corners, decks, and more.

MYTH: It costs a lot to transport modular buildings

Fact: You may have seen modular homes being trucked in convoys along Interstates and wondered how much that must have cost the builder. Actually, not that much, especially compared to the overall cost of the building. With planning, a move can be arranged inexpensively, and the price becomes even cheaper if the builder has his or her own transport fleet.

Whatever fuel cost is incurred is countered by the reduced amount of fuel needed to put up a building on site. This relates to the next myth:

Fact: Think of the trucks needed to haul modular components across the distance between the factory and the building site. Delivery can be done in a day; maybe two. Consider how many cranes, bulldozers, dump trucks, power tools and assorted machines are needed to build a conventional building, operating for months at a time.

Now consider that a modular-constructed building can be built from land-clearance to doors open in just four months, compared to the year or more it takes for conventional buildings to rise.

Fact: This myth is actually true. Modular buildings are cheap, but they are cheap in the best way possible: cheap in the way that saves you money when you build, allowing to make more money after financing and if desired, selling off your property once it’s built.

Modular building construction takes a plot of land and gives you a full-sized building within four months. Conventional construction would take a year or two to build anything similar. This gives you an eight extra months to lease up your investment compared to a conventional building.

It gives you eight fewer months sitting on a property that’s not earning income. Your building gets onto the market sooner, ahead of all your competitors, and that puts money in your pocket.

Think also of how much happier financiers will be with modular construction: eight fewer months holding onto construction loans. Investments are paid off eight months sooner. The savings there go right into your pocket.

The way of the future

Modular construction has several environmental advantages resulting from its quicker factory-based construction. Neighbouring property-owners, and the city councils they vote for love it because it means less disruption and dust around the worksite. And it allows developers to earn money on their investment sooner.

Modular building construction will be a hot topic at the upcoming North American New Apartment Construction Symposium, held at the Metro Toronto Convention Centre in Toronto on April 21 and 22, 2015.

There, you will have a chance to hear from experts in the field of developing, financing and managing new apartments, including some of the people behind Bonneville, and meet with many others in the industry looking to do the same. It is an excellent opportunity to learn about the opportunities in new apartment construction today.

Derek Lobo is the CEO of SVN Rock Advisors Inc., a unique full-service brokerage firm. He has focused his entire career on the North American apartment building business. He’s recognized…

Derek Lobo is the CEO of SVN Rock Advisors Inc., a unique full-service brokerage firm. He has focused his entire career on the North American apartment building business. He’s recognized…