Skyline International Development Inc. knows something most Canadian real estate companies don’t: it’s hot in Cleveland. While the words “booming” and “Cleveland” have not been used together for decades, the former manufacturing hub on the shore of Lake Erie is enjoying an economic renaissance thanks to the development of a service-, medical- and education-oriented business base. 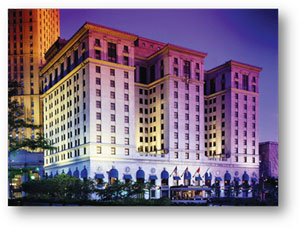 The city at the north end of  Ohio, a key election swing state, also has the attention of the country’s two political parties and will be the site of a major Republican party event. Even tourism is staging a comeback with US$4 billion worth of infrastructure spending.

All that attention has developers engaged in a hotel-building binge, with six or seven hotels currently under construction in the downtown and suburbs, adding about 1,500 rooms to the region.

Against that backdrop Toronto-based Skyline announced the purchase of the 491-room Renaissance Hotel in downtown Cleveland for the bargain price of a little less than US$20 million.

On the surface, it looks like Skyline just picked up a gem. Certainly it has acquired a historic hotel at far less than replacement prices. Built in 1918, the hotel complex covers nearly one million square feet, including 15,000 square feet of penthouse space expected to be converted to a spa and associated uses, a 68,000-square-foot convention area, several restaurants, and an under-utilized 10,000 square feet of ground-level commercial space as well as a 304-space parkade.

“In my mind it is one of the most beautiful old hotels on the East Coast,” said Gil Blutrich, Skyline’s president and chairman. “It’s the Grand Dame of Cleveland,” he said, comparing it to Toronto’s Fairmont Royal York hotel.

Perhaps best of all, the handsome hotel needs no major renovation, as its former Hong Kong-based owners redid every room over the past five years. “There are definitely some areas that we will have to invest, to modernize the property and to improve the guest experience. But definitely it is a well-kept, fantastic gem in the best location in downtown.”

Skyline said it won control of the Cleveland landmark, which had been on the market for well over a year, in a competition with three other major hotel operators. Despite the recent major renovation, it expects to carry out “a multi-million-dollar renovation” once the deal closes in October 2015.

The old hotel’s location may be its most valued trait: it features indoor connections to the recently built downtown casino, central train station and is adjacent to the East 4th Street entertainment and walking distance to the city’s NFL, NBA and Major League Baseball venues.

The Renaissance Hotel purchase marks Skyline’s second acquisition in Cleveland. In 2011, it snapped up the Hyatt Regency Cleveland at The Arcade, just a stone’s throw away.

The Hyatt Regency was another bargain buy: the 293-room downtown hotel was treated to a US$60-million renovation by a former owner before Skyline purchased it out of receivership for US$7.5 million.

Skyline hopes for a similar improvement at the Renaissance. The hotel is currently generating an average annual NOI of about $3.8 million. “It has already had some decent performance and we believe by re-activating un-utilized space and doing some more innovation to enhance the guest experience we believe we will be able to increase the net income in the next five years,” he said.

The Renaissance Cleveland, currently managed by Marriott Corporation, “boasts a picturesque view of Public Square and the city’s skyline.” Features include a marble-floored lobby complete with a fountain and large arched windows, “characteristic of the Marriott hotels.”

Skyline said the Cleveland acquisition is just the latest step in its 20-year history of buying and improving historic hotels and resorts.

The Toronto-based developer of hospitality properties and destination communities owns more than two million square feet of real estate, and has more than 2,600 acres with development rights for almost 7,000 residential units and nearly 1,300 rooms in its holdings.

In 2013, Skyline acquired 50 per cent of the retail component in both the village and surrounding the golf course at Blue Mountain and the remaining developable land. Last year, the company also acquired Bear Valley Ski Resort in California.