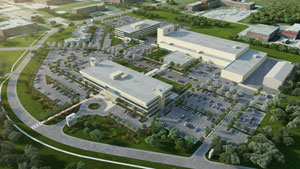 s part of the deal, the REIT (SOT.UN-T) is acquiring 2251 Speakman Drive from Slate Asset Management L.P., along with 2285 Speakman Dr., and “fully retrofitting them to create highly functional, contemporary facilities with modern amenities.”

SNC-Lavalin (SNC-T) will move some of its operations from nearby 2599 Speakman Dr..

“Historically it has been a little bit challenged by people thinking of it as more of a lab or specifically tech zone but it is also office and this opens it up for that,” he said. “It does lots of things positively for our whole portfolio out there, so not just these three builds but the Promontory (2655 & 2695 North Sheridan Way) which is out that way as well.”

The suburbs vs downtown

The lease arrangement will allow SNC-Lavalin to “consolidate around the backbone of its organization at its owned manufacturing facility located at 2233 Speakman Drive” and the remade buildings “will incorporate leading engineering and design best practices to deliver optimum energy and environmental efficiency.”

For SNC-Lavalin being adjacent to the manufacturing building was also “a bit of a leg up,”Antoniak said.

“There is a material cost difference and there are certainly businesses that need to locate at Bay and King but there are a whole other roster of other office tenants and businesses that don’t need to be in downtown Toronto,” said the Slate Office CEO.

“When you are looking at an all-in gross market, which I think tenants look at, a gross obligation of $50 (a square foot) even in a B-plus building versus something in the high $20s, low $30s in suburban and when you factor in basically free parking in the downtown, that is pretty compelling.”

“It won’t be the last of this kind of thing that we see.”

Antoniak, who joined Slate at the start of 2015, called the agreement “a perfect example of Slate Office’s strategy in action: the identification of overlooked, yet quality commercial properties such as these buildings in Sheridan Park, which we can then re-purpose and modernize while offering rents significantly below new construction cost – allowing us to attract and maintain high-quality tenants like SNC-Lavalin.”

A busy year so far

Antoniak, formerly executive director in the real estate investment banking group at CIBC World Markets before joining FAM REIT in January (later renamed Slate Office REIT), has been at the helm during a busy period.

“We are very active on the acquisition side, we continue to be active on leasing. We did 400,000 feet of leasing in the first two quarter, so (SNC Lavalin) will come out in the third quarter.”

The biggest deal to come on Antoniak’s watch so far is the June acquisition of a 14-property portfolio from Fortis Properties Corp. for $430 million. That acquisition nearly doubled the REIT’s asset base and gave it a national footprint with 49 properties and total gross leasable area of 5.4 million square feet.

The mixed portfolio of 10 office buildings, one mixed-use office complex and three retail centres of 2.8 million sq. ft. of GLA includes the Maritime Centre in Halifax; the Blue Cross Centre in Moncton; and Fortis Place in St. John’s.

“Principally a REIT is not a development vehicle because of the need to pay yield, but I think where we can add value, first and foremost is as a real estate operating company.  We can buy well, acquire well, assets below replacement costs and roll out the strategy of finding good quality tenants with term.”

“That is a more likely outcome towards the end of the year” than further acquisitions, added the Slate REIT chief.

“Certainly on the industrial side we will be able to sell those (at cap rates) in the sixes and we are doing the office deals in the mid-to higher sevens, that is good arb right there just in terms of capital.”