The company names have changed over the years but the philosophy behind Slate Office REIT’s (SOT.UN-T) latest acquisition is the same as the one that guided Slate founders Brady and Blair Welch when they handled acquisitions for the Blackstone Group: find undervalued office gems while rivals are focused on trophy assets. 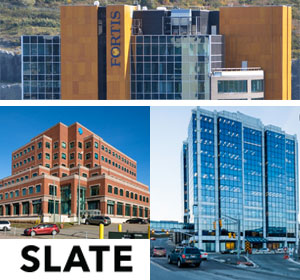 “This is not our first foray into office as Slate,” Conor McBroom, vice-president of investor relations with Slate Asset Management L.P. explained.

“The company, Slate Asset Management, has been around for 10 years and back in 2005, our initial strategy, when we were a one-strategy company, was to buy overlooked Canadian office and we did that with Blackstone Group (BX-N).”

In that prior iteration, the Welch brothers purchased buildings “up and down Bay Street” – addresses such as 330 Bay, 350 Bay and 360 Bay “and we were buying those buildings for $150 a square foot. Meanwhile, Brookfield was buying Bay Adelaide Centre across the road for $450 a foot.

McBroom, who has been with Slate for eight years, admits the assets the company purchased “weren’t very sexy. But then we go in, we roll up our sleeves, we re-tenant the properties, we bring the occupancies up, deploy capital in an intelligent manner.”

In all, Slate ended up doing 22 such deals with Blackstone, creating a 30-asset, 3.5-million-square-foot portfolio that was ultimately sold to Dundee REIT in 2011 for $831.8 million.

That history, McBroom concludes, shows “we are office guys. It is sort of in our DNA and we’ll be using a lot of the same operational strategy to execute on Fortis Properties Corp. and the balance of the Slate Office REIT portfolio which is now about 86% office.”

Proof that history can repeat, or at least rhyme, Slate Office intends to focus on non-trophy office properties, or essentially two-thirds of the country’s office inventory.

The REIT expects to find plenty of deals there: “A lot of other large investors just aren’t playing there. That is the Slate way, we are value guys, we like to buy assets at a discount to replacement costs. That is frankly exclusively what we do,” said McBroom.

“If you look at the Canadian REIT landscape, there really aren’t a lot of strategies that are focused on office to begin with, let alone non-trophy.”

Late last month, Slate Office closed on its acquisition of a 14-property portfolio from Fortis (FTS-T) for $430 million which it described as “transformational.”

The acquisition consists of 10 office buildings, one mixed-use office complex and three retail centres totaling 2.8 million square feet of GLA. The key for Slate was the office towers located in major markets in Atlantic Canada, which would cement Slate’s status as an office REIT.

The Fortis buy nearly doubles the REIT’s asset base and creates a national footprint with 49 properties and total gross leasable area of 5.4 million square feet. While the big numbers are nice and give the REIT added scale, the underlying numbers were key. (Fortis continues property selling spree, Property Biz Canada, July 9, 2015)

Brady and Blair Welch are both trustees of Slate Office (Brady is also chair), but the duo have stepped back somewhat with the hiring of real estate dealmaker Scott Antoniak as CEO in January. He was previously executive director of CIBC World Markets’ real estate investment banking group where he had a hand in more than $15 billion in deals.

The Welches, who own about 20% of the office REIT through Slate Asset Management, remain closely involved, said McBroom. “For the brothers, it is top of mind, we think about it every day.”

Antoniak’s job, along with Brookfield Asset Management vet Brian Moncik as chief financial officer, is to build bench strength at the REIT.

“That is what we would like to do as we grow Slate, build out all of our business verticals with dedicated teams.”

FAM was a diversified REIT with a mix of industrial, retail and office (about half office) which Slate acquired last fall. Slate moved to up the office holdings, acquiring seven office properties in the GTA for FAM in December and earlier this year dropped the FAM REIT name in favour of Slate Office REIT.

The Fortis buy ups the office mix to 86% of the overall portfolio and the REIT doesn’t expect to stop there.

“I think we are going to continue to find opportunities and can continue to grow,” said McBroom. There are few office-focused REITs to compete with, he added, and those that buy and sell office do not compete directly with Slate, he added.

“There is a lot of runway to grow. We will look at portfolios and we will continue to look at one-off acquisition opportunities as well.”