Slate Retail REIT (SRT.UN-T – SRT.U-T) debuted this week on the Toronto Stock Exchange (TSX). A pure play in U.S. grocery-anchored real estate, the REIT comes about three years after the company began its investment program in this sector. 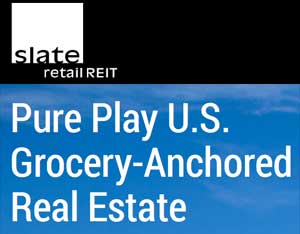 There are 29 properties in the REIT’s portfolio located in 14 states with name brand tenants that occupy 70 per cent of the leasable area. These brands include Kroeger, Walmart and Winn-Dixie.

Chief financial officer Brady Welch told Property Biz Canada in December the REIT is a mechanism for unlocking the value of the building portfolio for its investors.

“We could sell the real estate on its own as a portfolio or we could combine it,” he said. “These are REITs and we report like any other Canadian-listed REIT but we could go and list our units and that would be liquidity for the investors and so we are looking at doing that right now.”

Investors in the Slate funds until now did not enjoy the liquidity of standard REITs. They were invested for five to seven years, but they are collecting nice high single-digit yields on their investments and are expecting appreciation of the portfolio at the end of the term.

Toronto-based Slate Properties Inc. will continue in its capacity as asset manager of the REIT and the REIT’s portfolio.  Slate, including its affiliates and senior employees, own an approximately 10 per cent interest in the REIT, according to a company report.

“Our strong balance sheet and cash position will allow us to continue to execute on opportunities aligned with our growth strategies.” Welch said in a statement. “We are well-positioned to continue our track record of delivering unit-holder value in both the near and long-term.”

According to the prospectus issued in January, the REIT’s properties would include Slate’s Grocery Anchored Retail LP, which purchased six grocery-anchored shopping plazas in the U.S. for $44.8 million.

Slate intends to continue growth efforts in the U.S., where it sees a wider opportunity than in Canada, and will target “high-quality, mispriced assets” in secondary markets.

Earlier reports indicated Slate Retail REIT would also focus on properties with “the top two grocers by regional market; well-developed sub-markets with limited risk of new development; and anchor tenants with a track record of strong sales and profitability.”

“With the support of our unit-holders, we look forward to continued growth of our portfolio of well-positioned cash-generating properties,” chief executive officer Blair Welch said in a statement.

In the last month alone, Slate U.S. Opportunity No. 3 purchased the 159,780-square-foot Southgate Crossing in Minot, N.D. The property is fully occupied and anchored by a Cash Wise grocery store. It also added  the 77, 677-sq.- ft. Salerno Village Square in Stuart Port St. Lucie MSA, Fla. This property is 84 per cent occupied and anchored by a Winn-Dixie grocery store.

In late March, the Trust announced the pending acquisition of Mulberry Square, a 146,730-sq.-ft. grocery-anchored shopping centre in Milford (Greater Cincinnati) which is expected to be completed in the second quarter of 2014.  The property is anchored by a Kroger grocery store.

REITs on the TSX