A developer in Barrie, Ont., is taking its cues from The Big Apple in calling its latest condo development the Manhattan Upper West Side. 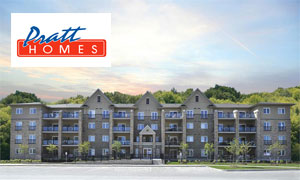 Pratt Homes’ condos are named for the tony New York City neighborhood, and the strategy appears to be paying off. Carrying on the theme, the three 48-unit buildings have iconic NYC names such as the Rockefeller, Bloomingdale and Empire.

Besides the condo buildings, the overall development contains three townhome blocks and several eightplexes. Located in Barrie’s west end, the development is also expected to get a restaurant themed after New York City’s famous Tavern On the Green.

Across the street sits a similar development called – fittingly enough – The Manhattan.

“They really have no clue”

“I really resent these people coming in and grabbing our name – they really have no clue.”

But even the Post admitted that “by NYC standards, the Canadian condos are a steal.”

The proximity of Barrie to Toronto – roughly 45 minutes away – means the buildings are attracting commuters who don’t want to pay the high home prices in the city. The strategy has worked with the condos virtually selling out.

Palmer says, however, the development’s higher density didn’t result from any conscious effort to mimic New York City; the developer had to switch building tactics after Barrie began experiencing land shortages in 2012. The city has a plan in place to annex lands to the south.

“Our bread and butter were detached,” Palmer says. “But when Barrie ran out of land, we needed to respond to that and keep moving forward as a business. We started doing condos, townhomes and eightplexes.”

Pratt Homes is the city’s oldest homebuilder, founded in the 1890s when Stephen Pratt built two houses. Between the 1920s and the ’50s, William Pratt built another 20, but the business really took off between the 1950s and ’70s when the company built 200 homes in Barrie.

From 1976 to 2004, Don Pratt ran the firm, building several hundred houses and pointing the way toward the company’s focus on green building with its involvement in the R2000 home concept launch in the city. Don Pratt was also the first to brand the company with the name and Pratt logo.

Pratt Homes’ next project is Yonge Station, which will again feature a mix of condos, townhomes and eightplexes. The development is being built in the city’s south end with immediate proximity to the Go Train station.

Palmer says the development will consist of two condo buildings, six townhome blocks and four, eightplexes. The condo buildings will contain 72 and 56 units, respectively. The entire development is train-themed to reflect its proximity to the Go Train station as well as Barrie’s steam train heritage, according to Pratt Homes.

The development will also feature public art installations from Ron Baird. One of Baird’s best-known pieces is a large-scale sculpture called Spirit Catcher designed for Expo 86 and currently located at Kempenfelt Bay in Barrie.

According to Palmer, the family has no interest in expanding beyond Barrie.

“I think our goal is to stay in Barrie as long as we can. We love the city. We love living and building here.”