As house prices on the Halifax peninsula head into the $400,000 average range, an astute city developer is betting smaller, less-expensive spaces will attract eager buyers. 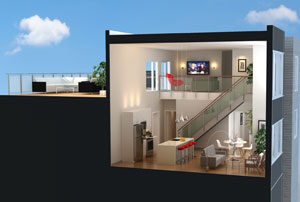 David Graham, president of Halifax-based Atlantic Developments Inc., is building a new 56-unit condo building in the city’s North End. While not quite micro-condos, the smallest of the units will be priced at $199,000 for just under 500 square feet. The building’s largest units will be 975 sq. ft. and cost approximately $299,000.

The Harris East condos, which are launching on May 1, target young professionals who mainly work downtown.

The building is being constructed just off Agricola Street in an area once considered rough, but now becoming home more and more to 20- and 30-something professionals. In recent years, small restaurants and shops have opened and revitalized the neighbourhood, which is within walking distance of the city’s core.

The area is now home to dozens of chic restaurants as well as the Bridge Brewing Company. Cyclesmith, one of Halifax’s leading bicycle shops is moving into the neighbourhood, which already contains such hip services and vendors as Ashtanga Yoga Halifax, Obsolete Records and Orphan Books.

Graham’s not alone in his optimism. Nearby, Polycorp is developing the 72-unit Q Lofts which will be built to a LEED Platinum status and priced from $299,900. The lofts will range from 953 to 1,240 sq. ft.

It’s not the first time Graham’s developed in the north end. On Gottingen Street he built the now sold-out Theatre Lofts, a 45-unit project, which he says was part of the “genesis of seeing some revitalization” in the area in 2011.

At the time, the idea of building on Gottingen was novel, to say the least. “The financial institutions were curious about what I was planning on Gottingen and not overly enthusiastic until it reached a certain level of sales,” Graham recalls. “Then they got onside with it.”

Graham is attracted to city neighbourhoods he refers to as a little bit edgy and close to downtown. “I think both Gottingen and Agricola are not for everybody, but I like those areas. I like developing there.”

The developer compares Halifax’s North End to Yaletown in Vancouver or Montreal’s Old City. “I don’t like the word gentrification,” Graham says. “I revitalize.”

Graham doesn’t just build condos in dicier neighbourhoods. Long Lake Village, his 40-acre land development at the end of Northwest Arm Drive, is a more traditional undertaking. The development will have upwards of 500 units in five phases.

Phase one consisted of multi-residential units and townhouses, which Graham sold off to two different commercial buyers. Phase two will consist of 37 single-family homes and 25 additional townhouses.

The area itself is situated next to a 5,000-acre pristine wilderness provincial park but only 10 minutes away from downtown Halifax by car, with access to one of the city’s largest power centres at nearby Bayer’s Lake.

Originally from Nova Scotia, Graham holds Bachelors of Education and Business Administration from St. Francis Xavier University and a Masters of Science in Real Estate Development from Columbia University.

Graham spent nearly 20 years in Toronto and New York. During that time he worked for, among others, Millennium Partners, a New York firm that has developed more than 2,900 luxury condos, among many other properties.

Graham said plenty of analysis around condos took place with Millennium, so he developed an interest in the market and some skillsets around condominium development. Seventeen years ago,  he founded Atlantic Developments, returned to Halifax nine years ago and began to purchase land.

“I think if we have a good quality product that’s at an achievable price in an interesting neighborhood; we’re doing something good for the city,” Graham concludes. “We’re helping to achieve some of the density that the city is hoping to encourage.”