With no fewer than four major projects under development in Halifax, Southwest Properties is betting on urban renewal and intensification in the port city. 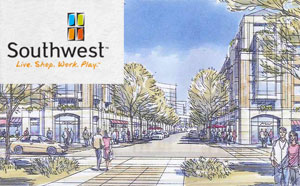 “It took a lot of years for the downtown of Halifax to hollow out, so it won’t happen overnight with people moving back down,” says Gordon Laing, Southwest’s president and COO. “We’re of the opinion that as opposed to trying to create a big robust office market, first you need people.

“You get people living downtown, then you’ll get restaurants and shops, services and then eventually employers will want to be where the people are.”

The largest of the four projects, while actually not in the city core, will nonetheless have an impact on the downtown. In late August, Southwest announced its Seton Ridge development, which will be located on 63 acres containing approximately 200 single-family homes and 1,600 apartments and condominiums. Estimated to cost $500 million, the development will also feature about 50,000 square feet of retail.

Seton Ridge is being built on the Sisters of Charity Motherhouse lands in Rockingham, overlooking the Bedford Basin. The development is located six kilometres from downtown and will likely attract people wanting to work in the civic core.

The congregation’s Motherhouse once stood on the land, which the Sisters of Charity had owned since 1872. Southwest, which is financing the development through a mix of equity and bank debt, estimates it will take eight years to build the community.

Another location for Pete’s

Southwest announced its first retail tenant in late August. Pete’s, which will open a 20,000-square-foot grocery store on the ground floor of the first building in the development, has become a major player in Nova Scotia’s boutique grocery business, with stores in Halifax and Wolfville. Pete’s owner Pete Luckett also has a vineyard in the Annapolis Valley.

The relationship between Southwest and Pete’s stretches back a number of years. When Southwest developed the Sunnyside Mall in Bedford, a bedroom community of Halifax, Pete’s opened its first store as an anchor tenant.

Laing said Jim Spatz, Southwest’s chairman and CEO, approached Luckett about potentially opening a store in the development six months ago. “He and Jim have that long relationship and (Luckett) knows we’ll build a high-quality development. He’d be a perfect anchor for it,” Laing says.

Southwest has made a name for itself developing sustainable buildings; The Grainery Lofts was the first LEED-certified multi-unit development in Atlantic Canada. Laing said all of their new buildings will target LEED Gold status.

Seton Ridge will go a step further and will seek LEED ND status, the standard for overall new developments and would actually certify the entire community. To accomplish this feat, Southwest plans to manage all the stormwater onsite through retention ponds and building roofs which will drain the water more slowly into the ground, allowing it to be absorbed.

The community will be designed to be transit-oriented, Laing says. “We’ll be one kilometre from the peninsula and six kilometres from downtown, so it really lends itself to that express bus mentality and hopefully we’ll then get more people working downtown, taking transit,” he notes.

Besides Seton Ridge, the developer is building Maple, a 21-storey apartment building in the downtown. The building will sit on a four-storey podium, contain 270 residential units, and will include 9,500 sq. ft. of retail space.

Next summer, the developer anticipates starting work on the Cunard Block, which will sit on Halifax’s waterfront near Bishop’s Landing – which Southwest also built and was the first significant mixed-use and multi-residential development on the city’s waterfront.

The Cunard Block will contain 300 apartments and would cost an estimated $75 million.

Southwest has also won the contract to build the new YMCA Centre of Community. Two buildings are involved in that project in which adjacent CBC building will be torn down to make way for an apartment building that will contain some 90 to 105 condominiums with retail on the ground floor.

The new YMCA, which will include a public atrium, aquatic centre, gym and indoor track, isn’t scheduled for completion until late 2017 or early 2018.

Laing isn’t worried about filling up all the new buildings, despite the fact development is currently booming in Halifax. He notes that while the population of Nova Scotia is shrinking, Halifax’s is continuing to grow.

Southwest’s current portfolio includes 1,200 units downtown, which have an occupancy rate of 98 to 99 per cent, Laing points out. “So we feel there’s room for more.”