Rock Advisors Inc. CEO Derek Lobo is excited about linking up with Sperry Van Ness International Corp., one of the biggest commercial real estate brokerage franchisors in the U.S., and in the process altering “a cosy market in Canada.” 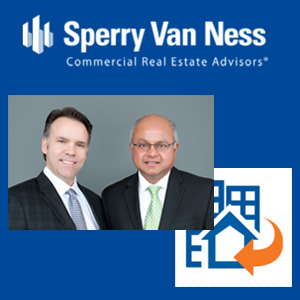 “SVN is a company that specializes in the mid-market, in the under-$5 (million) and under-$10 million deals,” Lobo said.  “They bring a tremendous level of professionalism to that mid-market which in Canada is not well-served – and is a big market.”

“We want to disrupt the commercial real estate market. I think the fact that brokers don’t cooperate generally doesn’t get the seller the highest price.”

That is a market dynamic Lobo intends to change in his role as CEO of SVN Rock Advisors Inc.

Lobo admits to being a recent convert to the SVN way of sharing selling properties to a bigger broker market (and sharing more of the commissions) in an effort to garner a higher selling price and a bigger commission pie.

“I wasn’t one of these cooperating brokers, until I saw the light,” Lobo said.

He observed brokers seeking double-ended commissions are not commonplace in the residential real estate industry so why should it be for mid-market commercial properties which should attract a wide range of potential buyers? Lobo acknowledged the model would not generally work for $100-million properties with a far shorter list of prospective buyers.

The momentum of Boston-based SVN growth plan was also a big plus for Lobo.

“Today a brokerage is complicated, you need data bases, packages, technology, but SVN has built a platform that you just plug in and play.”

The man in charge of spreading the gospel of the new SVN Rock Advisors Inc. brokerage across Canada will be Jim Dimanis, currently chief operating officer of Rock Advisors. He is both enthusiastic and daunted by the coming challenge, which includes expanding from its Burlington location.

“The ambition and the plan is that we will have approximately 30 offices from coast to coast,” said Dimanis. “We are already talking to six very interested individuals. One individual is part of a very large organization that recently went corporate.”

The new arrangement will allow Rock to expand beyond its multi-residential base.

“We are also going to make this franchise available to people who do office, who do land, who do industrial,” said CEO Derek Lobo.

Expansion will also not be simply geographical. “This allows us to create both territorial franchises, but also vertical franchises or cohorts.”

Logical local businesses include pretty much everything but hotels, he said, which remains a national business for brokers. Lobo initially sought out only a local franchise for his Burlington-based office.

“It is kind of like the shaving commercial, ‘I liked the company so much I bought it.’” Lobo said.

Malagisi, based in Buffalo, was previously the real estate representative for Public Storage Canada during their expansion years in the 1980’s when he spear headed development of self-storage facilities in Scarborough, Mississauga, and Eastern Ave. in downtown Toronto.

“He’s a 35-year veteran of the industry,” said Lobo. “He’s made self-storage his career. He was first hired by the industry leader and has seen it evolve into the billion-dollar industry that it is today.”

“Self-Storage is an emerging asset class with many institutional investors,” added Lobo, who noted the similarities between the multi-family and self-storage sectors.

Adam Dearbourn currently a  sales representative at  Rock Advisors will be working with Malagisi on self storage in Canada.

Set to key on smaller deals

The SVN Rock Advisors Inc. intends to zero in on smaller commercial deals which today comprise the heart of the market but do not, the argument goes, command the same level of detail sales with more zeroes attached enjoy.

It’s a market that falls between the big, national brokerages and smaller franchise chains that only occasionally tackle commercial sales, said Dimanis.

“It is really an untapped market, that mid-market. Whether you are in multi-family or in the other classes, that really is a sweet spot, that $2 (million) to $10 million area just seems to be an unserviced area.”

A compelling argument SVN puts forward is that most brokerages have little incentive to seek out the maximum price for a commercial seller and thus market to their established circle of favoured clients rather than casting a wider net.

An “eat what you kill” world

“To coin the phrase, it is dysfunctional, but it is just a matter that you have agents that work in these large brokerages, they have their own Rolodex of clients and they have procured these relationships over several years and they will just share the listing with their own clients,” said Dimanis.

“(They are) not wanting to go to another brokerage or another agent because they would have to cut their commission. I think it is ubiquitous in the industry and it is unfortunate, but that is the industry.”

“It is an ‘eat what you kill’ world and I think that people have just become that way before they are trying to maximize whatever commission they can get and, regrettably, the owner or the seller typically loses out.”

Changing that culture may be SVN/Rock’s greatest challenge.

“It is successful in the U.S.; SVN U.S. has got a very robust and successful model and they are taking on more and more of the market share,” said Dimanis.