The plunge in oil prices from more $100 a barrel to the $50 range has hammered Alberta’s economy, but that is not all bad news for Edmonton-based SpruceLand Properties. 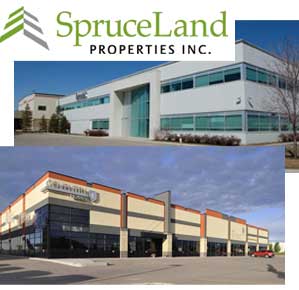 The 45-year-old company has lived through plenty of the highs and lows in the increasingly energy dependent province and has been prepping for tough times for a while now.

“It was obvious that the extremely good conditions that we have had for a number of years were not going to carry on forever so we had a specific strategy that we were pursuing,” said Steve Cribb, SpruceLand’s president.

The company has spent the past year busily updating its property portfolio by selling older properties and buying newer ones better suited for future economic conditions, staggering its leases and mortgage maturity dates. Only about 22 per cent of its portfolio is directly exposed to the oil and gas business.

SpruceLand has carried out a series of projections based on different economic scenarios to ensure it is prepared for most foreseeable events.

It has also been saving for a rainy day.

“We have built up what is for us a fairly significant cash reserve which does a couple of things: it gives us a lot of flexibility and protection in the event that something severe does happen in the market,” he said. “It also gives us the opportunity to take advantage of good buys that could very well be arising as a result of what is going on.

“We think that we are very well positioned.”

SpruceLand, which had $97.4 million worth of investment properties at the end of 2014 and has sold all but one or two properties that it would like to unload, is more inclined to be a buyer.  The company is not expecting “fire sales” though it does expect more of a buyer’s market in 2015.

“We’re very much in an acquisition mode,” Cribb said. “Certainly we are seeing there are fewer buyers in the market so that is going to lead to more opportunities, I think.”

It is yet to be seen if there will be “great buys or just simply good buys” he added.

Cash on hand at the company is at an all-time high – about $13 million – and rates remain at historical lows, but don’t expect the company to empty its coffers. “We wouldn’t take all our cash reserves and reinvest them; we will be selective and maybe do a deal or two while we’re continuing to generate cash so that our reserves will be replenishing themselves.”

In fact, Alberta’s worsening economic picture has made SpruceLand a pickier buyer. In his letter to shareholders, Cribb stated it has a “number of specific acquisition opportunities we were considering. We have now passed on all of them, in part because of individual circumstances and in part because of the likelihood of better opportunities to come.”

The company, he told shareholders, is also “open to considering and exploring strategic options” to  enhance shareholder value. That may, as he told RENX this summer, include taking the company public, an option that looks to be a few years away given weak market conditions.

Spruceland’s $100 million in assets comprises a diversified portfolio of industrial, retail, office and manufactured home parks. Its properties are mainly clustered in the greater Edmonton area, with the rest in Calgary, north central Alberta, B.C. and Saskatchewan.

Currently more than 50 per cent of its holdings are in residential with another 30% in residential in the form of two manufactured home parks with the balance in retail and office holdings.

Preston Manning, the company’s first president, is far more famous for his later career as a national stage politician.