The announcement of a new $65-million building is a small piece of SSQ Financial Group’s ambitious program to bolster the company’s presence nationally. 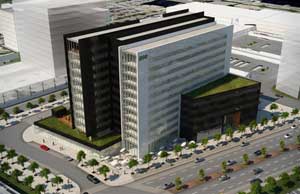 The diversified financial institution recently said it plans to erect a 12-storey, 250,000-square-foot building in the City of Longueuil, on the south side of the St. Lawrence River by the Island of Montreal. The project will be LEED-certified and house more than 330 SSQ Financial Group employees when it opens in 2016.

The class-A SSQ Tower will have 35,000 sq. ft of commercial space on the ground floor and office space on the others, and feature close proximity to Longueuil-Universite-de-Sherbrooke Métro station and a regional intermodal bus terminal.

Rene Hamel, SSQ Financial Group’s CEO, said in a statement that bringing its Montreal-area employees together in one place will encourage synergy between the institution’s various business lines.

“This decision is also in keeping with our goal to anchor our presence in Canada’s largest business centres, to affirm our leadership and to remain owners of the buildings our employees work in,” Hamel said.

The SSQ Tower is part of a massive redevelopment of Longueuil’s Place Charles-Le Moyne, which is currently underway. Triovest Realty Advisors has plans for a $160-million project that would include a commercial complex, a 20-storey high-rise rental apartment building and a 10-storey office tower for a government agency or large corporation.

Other work includes the City of Longueuil’s $53-million cultural complex that will contain a 1200-seat auditorium, a second 500-seat theatre and a 350-seat cabaret as well as an exhibition area, administrative offices, showrooms and studios.

Longeuil’s mayor, Caroline St-Hilaire, said in a statement, “The arrival of the SSQ Financial Group in this sector full of potential, the architectural signature of SSQ Tower and its green design, will contribute to the vitality of this major artery.”

The Quebec-based SSQ Financial Group has more than 2,000 employees in its subsidiaries, which include three life insurance companies and a realty arm.  The company has a business volume of over $3 billion and nearly $11 billion in assets under management.

The company has a couple of other projects in development. It plans an office building called 3000 Laurier Boulevard in Quebec City and on its website shows a two-tower structure.

SSQ is also working on Cite Verte located in the Sainte-Foy area of Quebec City, which it describes as the first and only eco-neighbourhood project in the province.

Once completed on the 93,000-square metre-plus site, Cite Verte will have 70,000 sq. ft. of office and commercial space and nearly 800 housing units. The housing will consist of a mix of condominiums and townhouses.

The Ordre des urbanistes du Quebec cited Cite Verte as one of the most significant urban planning projects in the province in the last 50 years, alongside other landmarks such as Expo 67 and Quebec City’s Old Quebec district.

SSQ’s current portfolio includes the SSQ Building in Quebec City. The 12-storey, 292,000-sq.-ft. building currently houses several of the company’s administrative departments. The firm has 60 per cent ownership in the Quebec City- based Roland-Giroux Building, which has six floors and 240,000 sq. ft. The building won two awards for construction techniques in 2005.