The GTA West industrial market serves as a prime example of the resilience in the region’s industrial sector. 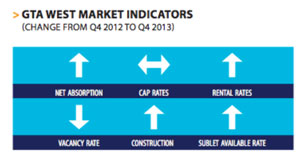 The Greater Toronto Area is the third-largest industrial market in North America and a major contributor to employment in the city and province. Interest in industrial real estate has taken off in the past few years with new REITs, REOCs and pension fund investors chasing opportunities in the sector, many building their base in the Toronto area.

A February report by Avison Young, provided an overview of the industrial markets in the town of Milton and the Halton Hills’ Premier Gateway Business Park that describes the factors that have contributed to the strong growth of these two markets through 2013, a trend expected to continue this year (Illustration from report above).

Milton straddles Hwy. 401, the spine of the region’s truck transportation network. The town is located on the west side of Mississauga and on the fringe of Toronto, as yet untouched by the concept of building up rather than out, where green field industrial development is still a reality.

Halton Hills’ Premier Gateway Business Park, established in 2002, is located adjacent to Hwy. 401 between the James Snow Parkway and the cloverleaf at Hwy. 407.  It is just east of Milton, in the municipality of Halton, and offers similar amenities to the business parks by the town.

Milton’s industrial sector has recovered from the 2009 recession to the extent its 19 million-square-foot (msf) of inventory has a 4.2% availability rate, having steadily declined from 5.1% in fourth quarter of 2012 and more than seven per cent in 2010.

Speculative construction in Milton that got underway in 2013, including Triovest’s 406,000-square-foot building at 100 Chisholm Drive and Cooper Construction’s recently completed 303,000-sf facility at 2995 Peddie Road is expected to be completed in 2014.  Until the new space comes on stream, Milton will continue to experience declining vacancy according to the report.

Avison Young attributes the demand for space to the strong presence of multinational and large domestic retailers establishing distribution centres in the region.  The growth of e-commerce and industrial activity related to the recovery of the American economy is expected to continue to fuel demand for industrial space.

An abundance of land and spec development 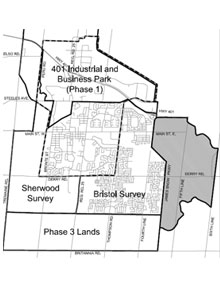 Milton has an abundance of undeveloped industrial land, establishing a short- and long-term stream of available development opportunities. It has a well-established business park referred to as the Milton 401 Industrial/Business Park that spans the highway.  There is a proposed infrastructure investment north of the highway that is expected to open up a northern section of the park to new development.

Milton’s Derry Green Corporate Business Park (dark grey on the map) is approximately 800 hectares (2,000 acres) and is forecasted for development in 2021-2031. The prime industrial land can be serviced by a CP railway and highway access subject to future zoning decisions.

Halton Hills’ Premier Gateway Business Park offers a similar type of space to Milton and is comprised of 5.8 MSF, according to the report. It saw its availability plunge from11.6% at the beginning of 2013 to 3.9% at year end. Avison Young attributed the drop to Target’s absorption of 435,000 square feet at 8041 Fifth Line North on a short-term nine-month lease.

While in other commercial real estate sectors speculative construction is a rarity, in the competitive industrial market in West GTA it is the norm. Kingsett Capital is currently completing a 105,500 sf. building at 35 Brown Ridge Road that will complement its 224,500 sf building currently onsite.  It is one of only three listings, all in the 100,000 sf range, in the Halton Hills park, according to the report.

The GTA West industrial market’s ability to fill vacant space will determine the rate of speculative construction, according to the report.

Increasing development charges may slow the pace of development where DCs in Milton and Halton Hills have surpassed their neighbours to the east, outstripping Brampton, Caledon and Mississauga.

Strong competition from the neighbouring municipalities may also dampen growth in Milton and Halton Hills. Mississauga, in particular, dominates the region’s industrial market and offers good proximity to Toronto, Pearson International Airport and the CN and CP Intermodal facilities.

In the release accompanying the Milton & Halton Hills Industrial Overview, the commercial real estate services firm pointed out that an “ultra-competitive environment for land” is driving up the cost of industrial development, resulting in narrow yields.

“In such a competitive market, it is challenging to justify speculative construction. Developers face a balancing act between achieving the desired yield and mitigating risk,” Avison Young said.

The Avison Young report explains why several companies have rushed to establish footholds in this real estate sector that is also vital to the Canadian economy with its focus on one of many industrial sub markets in the GTA.