The Starlight U.S. Multi-Family Core Fund concluded a busy five months with a US$14.35-million purchase of a 35 per cent interest in a Houston apartment complex,  using up the $48 million in proceeds raised from its April initial public offering in the process.

“We are fully deployed, we have invested all the proceeds that we raised in our first fund,” said fund president Evan Kirsh. “We are just trying to figure out where we go going forward, but we would like to grow.”

That will likely see the Starlight fund going back to the market to raise more money for investors. The fund is traded on the TSX Venture exchange (TSX.V: UMF.A, UMF.U).

Starlight’s philosophy is similar to two Canadian-traded REITs (Milestone Apartment REIT and Pure Multi-Family REIT) which have targeted the Southern U.S. multi-res market: there are plenty of properties to buy and prices look attractive compared to Canada, and rents look like they have room to rise in an improving U.S. economy.

Where the Starlight vehicle is a bit different is in just how choosey it is about what it buys.

“We don’t do fixer-uppers. We are kind of new to the U.S. and that is a little ambitious for us to start and our view is the simplest thing to start with is properties that are fully occupied (and new).” 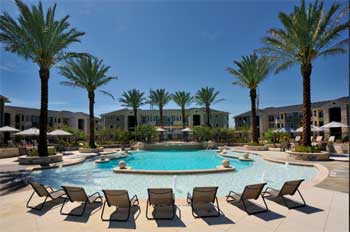 Starlight Multi-Family’s Houston purchase is fairly typical of what it wants to buy: The Alexan Eagle Creek property is a 412-unit, garden-style, Class-A apartment complex built in 2009 in a rapidly growing area of North Houston (picture on left).

The fund took the minority stake because Daniel Drimmer, a director and the chief executive officer of Starlight U.S. Multi-Family, purchased the remaining 65% interest.

Eagle Creek consists of 19, three-storey walk-up buildings on a 22.13-acre site made up of one- and two-bedroom suites with high-end features.

It’s a multi-res property type that simply does not exist in Canada and stands to benefit from the economy recovery, facts which have prompted the likes of Pure Multi-Family, Milestone and Starlight to buy a piece of the action.

“There you have the clubhouse, the pools, the fitness centres and a big piece of land,” said Kirsh. “You have a big piece of land; generally the properties we are buying are 10 acres or 20 acres. You don’t really have a lot of 20-acre sites in Toronto or Calgary.”

With the acquisition of Eagle Creek, the Starlight Fund now operates and owns interests in a portfolio made up of 1,368 multi-family real estate suites located in Dallas-Fort Worth and in Houston.

The Starlight fund is part of Starlight Investments Ltd., which was created in 2011 by real estate investor Daniel Drimmer. He founded TransGlobe Property Management Services Ltd. in 1995 and grew its portfolio from only a few residential real estate assets to the third-largest multi-family owner in Canada.

Drimmer also founded TransGlobe Apartment REIT (TSX: TGA) and completed its initial public offering in May 2010. In 2011, TransGlobe REIT was privatized in a $1-billion deal and many of its properties were acquired by Starlight.

Kirsh hinted more news will be coming soon: “You may see something soon. Keep checking the website.”